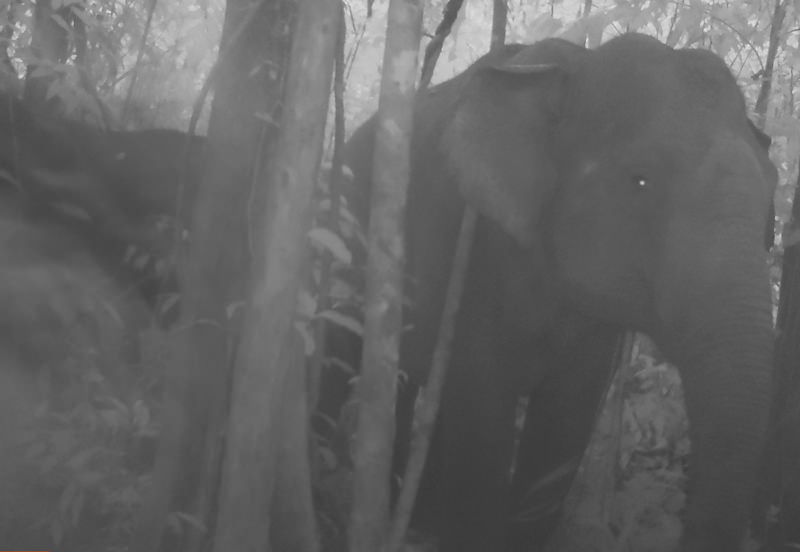 by Anadolu Agency Jan 18, 2016 12:00 am
A 12-strong herd of endangered Asian elephants - from juveniles to older pachyderms - has been captured roaming around a protected Cambodian forest in "remarkable" footage that also warns about the threat of illegal logging in the area.

Cambodia Harvest says the group is the largest captured on camera in the region over the past decade - a rare feat given the threat many Asian countries face from deforestation. Camera-trap footage obtained by the integrated food security and climate change program, and released Friday by Conservation International (CI), shows the elephants often up close to the camera, grazing, gathering and walking through the thick forest.

It was captured late last year. According to CI, the area is actually home to "one of the largest wild populations left in Southeast Asia," but that the animals' elusive nature and the size of the protected area 4,013 square kilometers - often make them difficult to track and record. Asian elephants "require intact forest habitats to thrive," but "threats such as hydropower development and agriculture are impacting the animals' routes and causing increased conflict with humans as the animals raid crops," CI said. In a statement, country director Bunra Seng said a new conservation trust initiative has been established with a $2.5-million donation from the Global Conservation Fund. CI and the government's forestry administration will now try to raise another $7.5 million to continue the work of protecting the forest.

"Illegal logging and wildlife poaching for trade and food, through to large scale agriculture and land clearing concessions are having devastating effects," Seng added.

In April 2013, the Wildlife Conservation Society (WCS) released footage of a herd of 16 elephants, young and old, tramping through the Seima Protected Forest in the eastern province of Mondolkiri. At the time, WCS said the elephants' main threat was being posed not by hunters or poachers, but by "habitat loss and encroachment." Cambodia has one of the highest rates of deforestation in the world, according to a report released last July by Forest Trends, which found that about 2,000 square kilometers of forest were being lost every year.

The report also found that by the end of 2013, about 14 percent of the country had been given away as economic land concessions, but that 80 percent of these concessions are within the boundaries of protected areas.
RELATED TOPICS