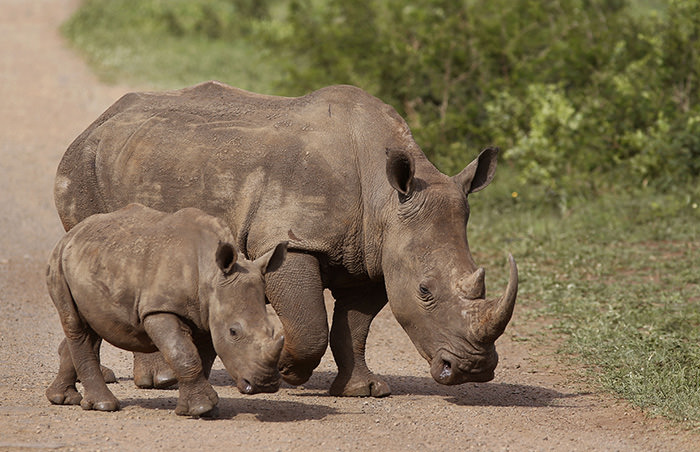 hinos walk in the Hluhluwe game reserve South Africa (AP Photo)
by French Press Agency - AFP
Jan 21, 2016 12:00 am
Nearly 1,200 rhinos were killed by poachers in South Africa last year, officials said Thursday, a slight decrease since 2014, but still another year of carnage fueled by Asian-led demand for their horns.

The slaughter has been driven by demand for their horns in countries such as China and Vietnam, where they are prized for their purported medicinal properties. The horn is composed mainly of keratin, the same component as in human nails, but it is sold in powdered form as a supposed cure for cancer and other diseases. "These numbers are hardly cause for celebration or complacency," said Sabri Zain, director of policy at Traffic, the wildlife trade monitoring group. "The figures remain unacceptably high, and the scale of the rhino poaching crisis is spreading continent-wide."

Traffic said poaching in neighboring Zimbabwe and Namibia had increased – meaning last year was the worst for rhinos killed across Africa for decades.

South African Environmental Affairs Minister Edna Molewa admitted the "onslaught against our rhino[s] has continued unabated," but she hailed the toll of 1,175 as a major success. "We are very pleased to announce that for the first time for a decade, the poaching situation has stabilized," she told reporters in Pretoria. "This is very good news and very good cause for optimism." Molewa said 317 poachers had been arrested in 2015, up from 258 in 2014. Many of the armed gangs are based in Mozambique, across the border from the Kruger National Park.

The soaring price of rhino horn and the poaching crisis has sparked a debate on whether to legalize sales in an attempt to stifle the lucrative black market trade. Legally dehorning a rhino would see a farm owner put the animal under anesthesia and then saw off the horn.

A South African judge in November lifted a domestic ban on the rhino horn trade, alarming conservationists. The government lost an appeal against the decision this week, but said on Thursday it would go to the Supreme Court of Appeals. "It is hard to see any positive conservation benefits from lifting the moratorium on domestic trade of rhino horns," Colman O'Criodain, wildlife trade expert at the World Wildlife Foundation (WWF), said. "There is no domestic demand for rhino horn in South Africa, so it is inconceivable that anyone would buy it – unless they intend to sell it abroad illegally or they are speculating that international trade will be legalized."

The case, bought by two game breeders, came ahead of a meeting in Johannesburg in September of the Convention on International Trade in Endangered Species of Wild Fauna and Flora (CITES), which could lift the global ban. "Every rhino horn we cut off, the rhino stays alive, whereas every single rhino that poachers take the horns from is killed," Izak du Toit, a lawyer for the game breeders, told Agence France-Presse (AFP). "This is simply a legal alternative to the current illegal killing of animals."

Some experts believe the real figures on poaching deaths are far higher as many carcasses are never recovered.