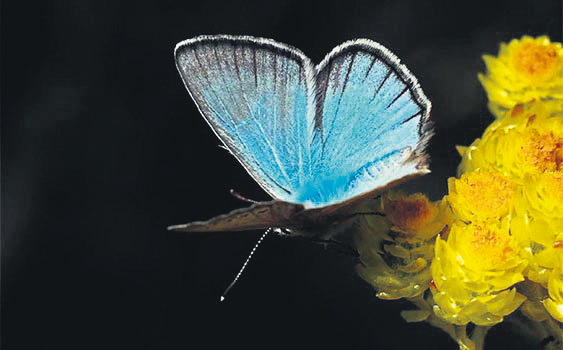 by daily sabah Jan 21, 2016 12:00 am
Anatolia now hosts a new butterfly species, National Geographic Türkiye reported. The new butterfly species has multiple eyes and is found in the Taurus Mountains in Kahramanmaraş. It is named "Ali Bali" after its discoverer. The butterfly species called "Polyommatus" in Latin, takes its name from the several spots on its wings and it can be seen in Palearctic Region. Ali Bali, who gave his name to the new butterfly species, began taking an interest in butterflies after learning about the endemic butterfly species in Turkey and soon his interest turned into devotion for amateur research. "It was a species that I had never seen before. I knew it was something new but I had no idea it would be the discovery of a new species for the science world," said Bali.

The amateur photographer sent the photographs of this new butterfly species to French entomologist Frederic Carbonell who is one of the most important authorities on this matter. Following initial examinations, the butterfly in Bali's photos was said to show similarities with Polyommatus theresiae; however, further scientific investigation on the photos as well as the samples showed that it is an entirely new butterfly species with unique characteristics. The discovery of this new species was announced by National Museum of Natural History's magazine "Bulletin de la Societe entomologique de France" and became official in December 2015.
RELATED TOPICS