Syrian girl says she would sacrifice her eyes for her dad 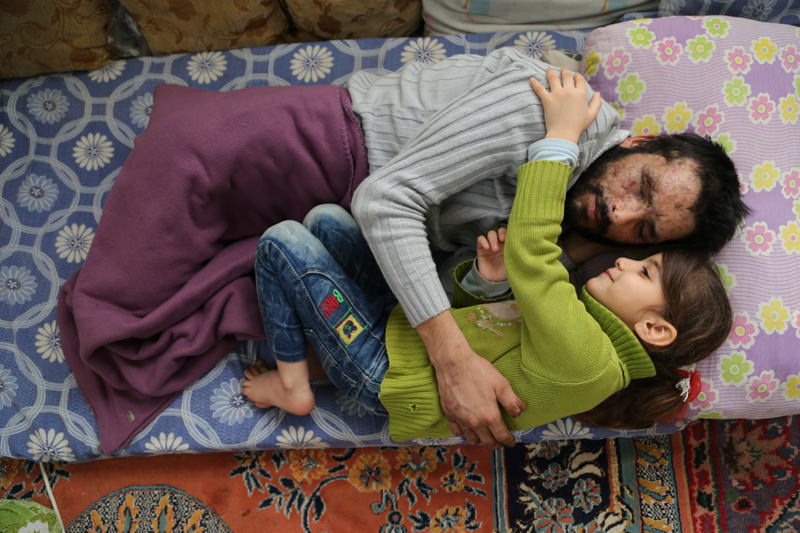 by Daily Sabah with AA Jan 25, 2016 12:00 am
A Syrian girl's plea for her visually impaired father moved everyone to tears as her story made rounds on social media last week. Dubbed "Gözyaşı" ("teardrop" in Turkish), five-year-old girl is the daughter of Mamun Khalid Nasir, a father of five who survived the brutal conflict in Syria and took refuge in Turkey. Nasir, 27, is thankful to be alive, but he is now bedridden. It all happened almost a year ago, after he was injured by a barrel bomb dropped from helicopters belonging to the regime of Syrian dictator Bashar Assad in the northwestern Syrian city of Idlib. He has since lost his legs and the ability to hear and see.

Nasir, his wife, children and mother took shelter in southern Turkey in December. "Gözyaşı" is pleading for Turkish doctors to help him. "My dad cannot see me, and this makes me feel very sad," she said. "Take my eyes and give them to my dad. I want him to see and love me. God will not separate us. I love him so much," the young girl said.

The extreme suffering of this innocent family is only one example of the tragic nature of the ongoing civil war in Syria. The has conflict claimed hundreds of thousands of lives over the past five years, and continues to escalate with the emergence of terrorist organizations such as DAESH and Russian airstrikes assisting the Assad regime and accused of indiscriminately killing civilians.

A Turkish charity recently responded to Gözyaşı's appeal for her father's treatment. The charity, which first delivered humanitarian aid to the family, announced the father will be transferred to a hospital for his treatment. A charity official told AA that a prosthetic limb will be fitted to Nasir, and doctors were planning to implant a single prosthetic eye. He will also be treated for severe burns on his face.
RELATED TOPICS