Computerized greenhouse farming puts the future on your plate 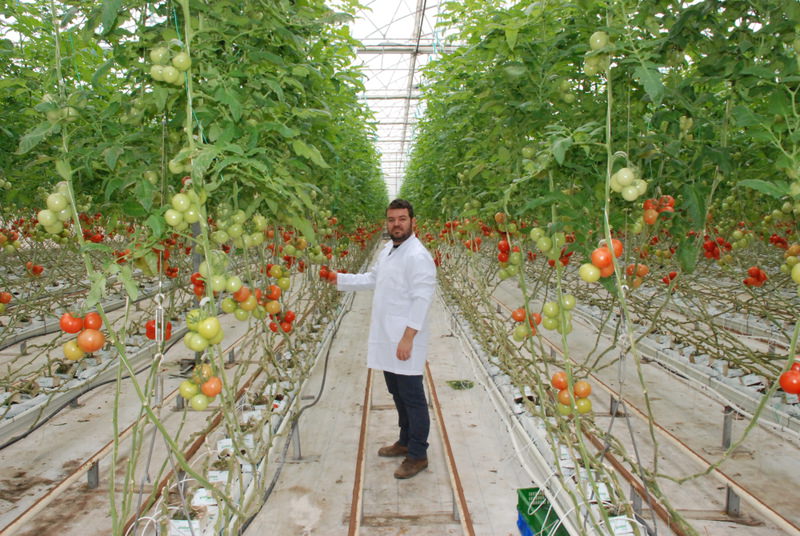 by Anadolu Agency Feb 04, 2016 12:00 am
Agriculture in Turkey has been transforming in line with technological advancement. Greenhouses that use geothermal energy for heating and computers to monitor the growth of vegetables and fruits are notable for their advanced equipment. Tomatoes, peppers and cucumbers that are grown in these greenhouses only feel the touch of human hands when it is time to harvest. The greenhouses are heated with hot water from a geyser and ideal climate conditions are established for each vegetable and fruit. Computer programs monitor the balance of heat, sunshine, humidity and wind, and the vegetables are watered according to computerized data.

Speaking to Anadolu Agency (AA), Ahmet Berkin Sarıefe, the production manager of a technologic greenhouse in Denizli, said: "If the greenhouse requires a climate change, the windows are opened and it starts to rain inside. For instance, the tomatoes need certain climate features. We upload this data into the computer programs and the computer arranges the necessary climate inside the greenhouse. In short, we are creating an artificial environment. More than 90 percent of annual growth monitoring is handled by computer." Sarıefe claimed that greenhouses are healthier and more productive compared to open-air fields as they do not suffer as much from plant diseases, reducing or removing altogether the need to apply insecticides, herbicides and other chemicals.Sezgin Kutlu, the director of food, agriculture and livestock in Denizli, said geothermal greenhouses practice good farming, which is safer for people's health. "Sometimes people believe the myths like that tomatoes should not be eaten in winter. Vegetables and fruits grown in these greenhouses are 100 percent safe. As we monitor all climate changes in greenhouses, we do not use insecticides as much as classic agriculture," Kutlu said. The project for geothermal greenhouses was initiated in 2007 in Denizli. So far, a total of 510 modern greenhouses have been established, and the number of modern greenhouses will increase in the region once the Organized Greenhouse Site is built.

Tomatoes are the most widely grown fruit in the computerized greenhouses in Denizli. According to Kutlu, farmers are satisfied with the harvest this year. "We export 90 percent of our harvests to European countries. Last year, we exported 13 gross tons of tomatoes that were grown in computerized greenhouses, and this year we expect that number to increase to 16 gross tons. Since our products are safe, the demand for our fruits and vegetables is high," Kutlu said.
RELATED TOPICS