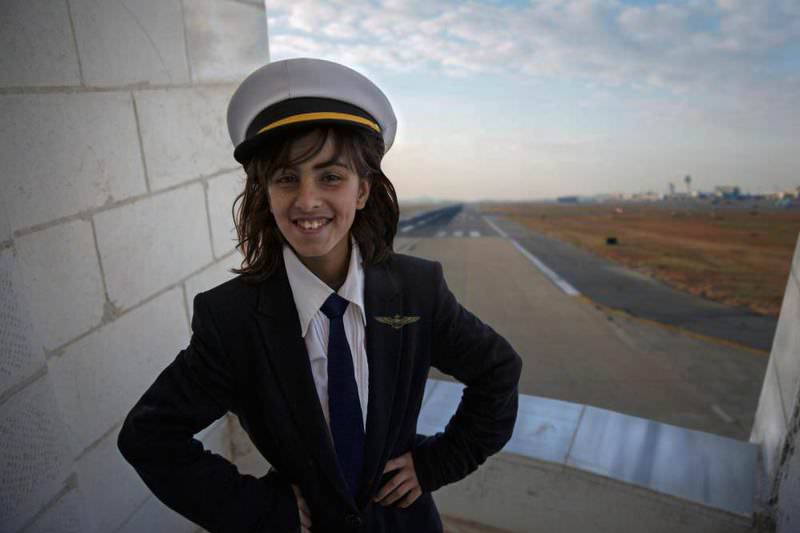 The debate on the future of Syrian refugees is heating up everywhere around the world, while detailed reports continue to highlight threats such as sexual harassment and violence that refugee women and girls face at every stage of their journey. To reduce their exposure to harm and help them to envisage a better future, the International Rescue Committee's (IRC) program "Vision not Victim" meets young refugee girls and asks them to star in their own photo shoot.

Refugee girls aged 11 to 16 living in Zaatari Refugee Camp and in Mafraq in the north of Jordan, are photographed in their future career environment. The girls were photographed by project founder Meredith Hutchison, with each one of the photos being very inspiring. The photo shooting generally took place in real working environments like hospitals, schools or airports. The project gives a chance to Syrian refugee girls, who have mostly suffered trauma and loss, to use their skills and boost their potential to achieve their dreams. A group of mentors also speak to the refugee girls in workshops, sharing their own experiences and stories to help them overcome obstacles.

Among the photographed girls, Haga, a 12-year-old Syrian refugee, wants to become an astronaut when she grows up. She spoke to the IRC about her future career. "Ever since we studied the solar system in primary school, I have wanted to become an astronaut. I would imagine myself up in the sky discovering new things. I love being an astronaut because it lets me see the world from a new angle. In this society my path was not easy - many people told me a girl can't become an astronaut. I would tell young girls with aspirations to not be afraid, to talk to their parents about what they want and why, to always be confident and know where you want to go," she said.

Another ambitious refugee girl who also participated to the project is Mona, who is only 10. Wanting to become a well-respected physician in the future, in the photograph Mona is pictured meeting patients at a hospital and asking about their condition. "In this image, I am in the future and a well-respected physician at a major hospital in Syria. I am asking my patient about her pain and helping her get better. I feel very fortunate to be where I am today. My mother was born and raised in a village and didn't go to school, but as a young girl I had the opportunity to learn and grow into a great doctor. People feel safe around me, they believe in me, and I use my skills and compassion to help many others," she said to IRC staff. The girls shared their photos with their families and friends, becoming a source of inspiration for other refugee girls in the region.

Sarah, 15, is photographed as fashion designer. She wants to make women look elegant with her designs. "I design normal daywear that combines rough and soft fabrics, as well as formalwear and wedding dresses. I love fashion because it is a way for everyone to express themselves, and when it is done right, your clothing should make you feel special, beautiful and confident," she said.Merwa, 13, is as creative as Sarah and takes her brush to work on a canvas. She speaks about her future career as painter: "... I am a popular painter, working on a landscape in oils. When I was younger, painting was a hobby - but as I grew older I saw I had a great talent and went to art school. Now I have my own gallery where I sell my paintings and sculptures. My hope is that my artwork inspires peace in the world and encourages people to be kind to one another." Hutchison took many other photos of refugee girls appearing as police officers, lawyers, pediatricians, chefs and pilots. Amani, 10, says, "Flying is adventurous and exciting. When I was younger, my brother always told me that a girl can't be a pilot, but I knew deep down this is what I wanted to do. I finished my studies and found a way to get into an aviation school. Now, not only do I get to live my dream, but I also get to help people travel, to see the world and discover new places."

Initially piloted in the Democratic Republic of Congo in late 2014, Vision not Victim tries to expand the vision of refugee girls and asks them one of the most important questions of their life: "What do you want to be when you grow up?" Based on the current numbers, the ongoing Syrian conflict has produced almost 4.6 million refugees, more than 2 million of whom are in Turkey and 13.5 million people are in need of humanitarian assistance in Syria.
RELATED TOPICS