Rose production a blooming business ahead of Valentine's Day 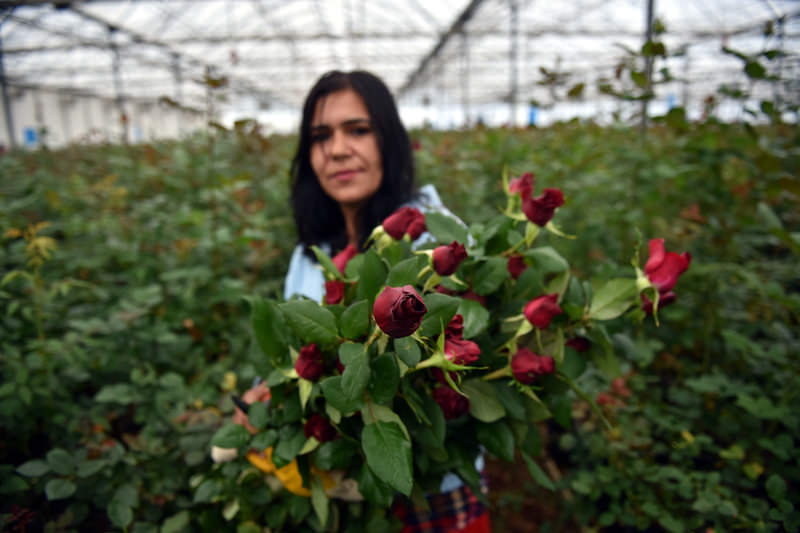 by Anadolu Agency Feb 09, 2016 12:00 am
Rose growers in Mersin, one of the most important rose production hubs in Turkey's Çukurova region, are very busy preparing for Valentine's Day, having already received thousands of orders.

The growers use organic farming methods and grow their roses in green houses to avoid the effects of unfavorable weather conditions, working diligently to meet consumer demands. The roses are picked early in the morning and processed using special machinery before being prepared to be put on the market. Dilek Bircanoğlu, the production manager of Roseland Farming, said their business produces two million roses every year on a 15,000 square meter area, noting that they have already prepared 100,000 roses for Valentine's Day on Feb. 14.

Bircanoğlu said the roses reach the hands of buyers after going through an arduous process, emphasizing that "We are growing roses without soil. They are grown in an environment similar to that of a coconut shell called a "cocobeat," nourished with special serums. We begin the cutting process early in the morning, and deep-freeze them in four-degree cold storage units. This process is important in prolonging their lifespan." Twenty roses are made into a bouquet and then sent to market after the lengths of their stems are adjusted. "Our roses are sent to flower auctions and flower shops across Turkey, especially Istanbul. We sell a single rose for around TL 2 [$0.65]," said Bircanoğlu. She underscored the importance of Valentine's Day for both couples and flower producers. "A rose is one of the most meaningful and cheapest presents that people can give each other," she noted. Bircanoğlu recommends domestic roses, saying they are preferable to imported roses. She added that a single rose is sold on Valentine's Day for TL 5 to TL 20.
RELATED TOPICS