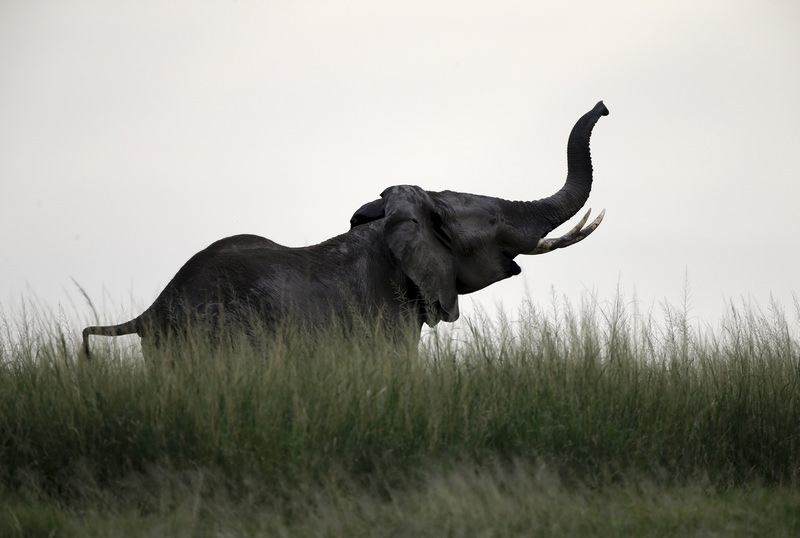 As chaos arose in South Sudan, armed poachers uncontrollably killed elephants, despite rangers' effort to protect the precious wildlife in the area

South Sudan's descent into chaos has not only resulted in a great number of civilian casualties but has also affected already depleted wildlife. In two years of conflict, armed poachers in South Sudan have killed about 500 elephants as rangers struggle to protect animals.

"The elephant population, estimated at 5,000, is facing an increasing risk from poaching," said Major-General Philip Chol Majak, director-general of South Sudan's wildlife department. "It is a tragedy; the conflict is a having a terrible impact; about 500 have been killed, but we are yet to make a headcount," said.

"In just two years, we have witnessed this enormous loss," Majak said. "This indicates that there are an alarming number of elephants being poached." In a single day in January, 20 elephants are killed, Majak said. Elephants have been slaughtered for their tusks, while giraffe and antelopes have been mowed down with machine guns for meat to feed the tens of thousands of soldiers and rebels battling each other since the start of the more recent conflict.

The country descended into violence in December 2013 after government troops led by President Salva Kiir and rebel forces loyal to former Vice President Riek Machar began fighting. Tens of thousands of people have been killed, and almost 2.4 million others have fled their homes since South Sudan's war began. The survival of South Sudan's wildlife was once a rare cause for hope in a land left in ruins by the decades of conflict that paved the way for its independence in 2011. After decades of civil war, the African country had lost more than 100,000 elephants in 25 years, according to a 2012 survey.

Today, at least four cases of ivory trafficking are pending in court in South Sudan with six people, including two foreigners (Egyptian and Sudanese), arrested crossing the borders. "The motive is to take the ivory to market, and if they cannot get to market, it is exchanged for cows and used for making ornaments," Majak said. In central Shambe National Park, "a good number of elephants remain in the swampy area, but there are people who cross using canoes and kill these elephants," he added.

South Sudan is home to six national parks and 13 game reserves. As the conflict has carried on, several have been cut off, with poachers - including members of the government army -- taking advantage of a wildlife authorities vacuum to operate at will, Michael Lopidia, deputy director of South Sudan's Wildlife Conservation Society, told Anadolu Agency.

South Sudan's minister of environment and wildlife conservation, Deng Deng Hoc, added that the country was struggling to prosecute poachers and smugglers because it lacked the laws to try them. The government will reportedly soon pass anti-poaching legislation to help end the illegal trade. South Sudan's zebras and rhinos may have already been wiped out, Deng said, warning that the young nation's giraffes are also on the brink of extinction or of migrating to neighboring countries. And the country - and more specifically its citizens -- is strapped for cash. "While driving to Jonglei [north-northeast of Juba] last week, I caught soldiers in full uniform openly selling bush-meat, and when I stopped and asked them, they said they were hungry and did not have money. I left them," wildlife department director-general Majak said.

The army has not received any official report from the wildlife department, apart from verbal complaints, Army spokesman Lt. Marko Mayol said over the phone.

"In October, we started working with the department of wildlife and an American organization called 'Stop Ivory' to come up with what we call the national elephant protection initiative in which you keep all the ivory away from human use," Lopidia said. "The South Sudan Wildlife Department established its first inventory of elephant ivory and rhino horn stockpiles, and 133 seized elephant tusks have been marked and stored away," Lopidia said. A network of 15 field-based intelligence officers selected in December "will roll out an action plan targeting ivory trafficking across the country and across national borders", he added.

The introduction of "K-9," a dog unit in January, with two German shepherds bought from Maisha, an Israeli company, will also assist in combating trafficking, Lopidia said. "They will be deployed at strategic outlets like Juba International Airport and at the Nimule border crossing [with Uganda] and checkpoints around. They are being trained to sniff out ivory, rhino horns, pangolin, bush-meat, bullets and guns," he said. Trans-boundary cooperation deals with neighboring Ethiopia and the Democratic Republic of Congo have also been reached to track down traffickers, Majak said. But the preservation of wildlife will only truly become a reality once armed conflicts cease. A peace deal signed in August 2015 by President Salva Kiir and rebel leader Riek Machar is stalling amid a dispute over Kiir's reorganization of the oil-producing country into 28 states. The transitional government is soon to take shape, with parties already agreeing on the ministerial structures.
RELATED TOPICS