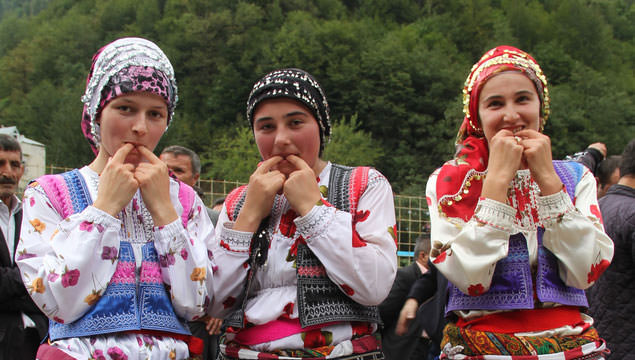 by Daily Sabah with AA Feb 17, 2016 12:00 am
The locals in the northern village of Kuşköy, in the province of Giresun, call it "kuş dili," (bird language), a form of whistled language that help them communicate across the region's deep valleys. With the initiatives of a public education center and the provincial governorate, whistling Turkish is now taught at schools. Karabörk Primary School launched the courses with 30 students, where the participants learn the techniques of the language, as well as the physical anatomy of the mouth and teeth. In later stages, the students are taught to understand the whistled language and how to communicate by using it. The students taking the course live in Kuşköy and neighboring areas.

Zafer Balcı, the head of the District National Education Directorate, said the history of whistled Turkish languages dates back 400 years and was a very common means of communication among locals living in the mountainous region. "We plan to offer this course to elementary, middle and high school students so they will be aware of their own culture and transfer it to future generations. For the first stage of the project, we chose primary school students," Balcı said. He added that children also learn how their parents and grandparents used to communicate without landline phones or cellphones. "We are working to keep this tradition alive," he stressed.

The whistled language is currently used by around 10,000 people in northeastern Turkey, and it can carry messages as far as 5 kilometers. It is an adaptation of the Turkish language into whistles, not a distinct language. A study conducted by Onur Güntürkün of Ruhr University in Germany revealed that "whistled Turkish uses the full lexical and syntactic information of vocal Turkish, and transforms them into whistles to transport complex conversations with constrained whistled articulations over long distances." A total of 31 habitants of Kuşköy, who can speak whistling Turkish, participated in the study.In 2011, whistling Turkish, which is dying out, was announced as canditate to UNESCO's intangible cultural heritage list. Other kinds of whistling languages are found in Mexico, France, the Canary Islands and Greece.
RELATED TOPICS