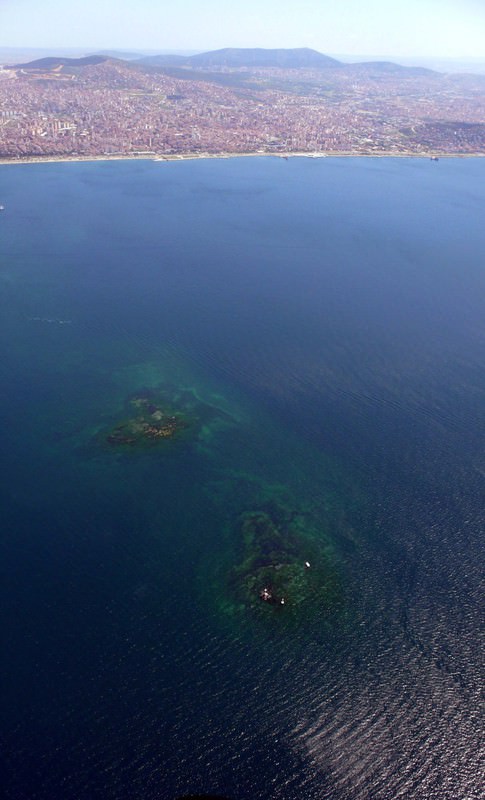 by Daily Sabah with IHA Mar 01, 2016 12:00 am
Joint study is being carried out by three universities and the Maltepe Municipality to research Istanbul's submerged Vordonisi Island, which seeks UNESCO status as a world heritage site. The island, which is situated 700 meters off the shore of Istanbul's Maltepe district, was submerged after a big earthquake in A.D. 1010. The joint research will uncover all aspects of the island, and a comprehensive report will be submitted to the Maltepe Municipality, Turkey's Ministry of Culture and UNESCO.The discovery team said that scientific studies using radiocarbon dating and other suitable methods will help scientists discover Vordonisi.

"Because different marine species have covered the archeological site, it is no longer possible to see the island's former monastery," the team said. The submerged site is not very well known amongst the current residents of Maltepe, and consisted of one big and one small island that were known as the 10th and 11th islands of Istanbul. Istanbul's islands include Büyükada, Heybeli, Burgaz, Kınalı, Sedef, Tavşan, Kaşık, Yassı and Sivriada. The Vordonisi Island became more visible in the last decade, and was brought to modern awareness by historian Semavi Eyice in 1936.

In October, a diving team photographed the island to better understand the huge Istanbul earthquake and its effects on the region, as well as the island. Professional divers shed light on the archaeological site by photographing the area, including its ancient monastery, and the site will be ready for diving tourism soon. Maltepe Mayor Ali Kılıç accompanied the diving team, and said that the monastery was known to be open during the Byzantine period. Kılıç said that they will turn Anatolian Istanbul into a tourism hub and draw more tourists, once the one and only underwater archaeological park of Istanbul is open for visitors.
RELATED TOPICS