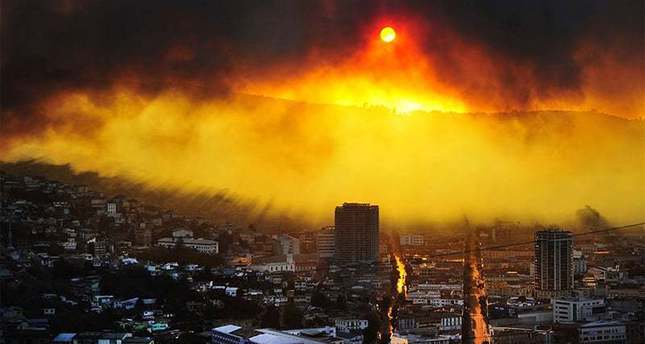 | AFP Photo
by Associated Press Mar 06, 2016 12:00 am
Colleges and universities worldwide are incorporating into their curriculums the evolving genre of literature that focuses on the changes coming to Earth as the result of climate change "cli-fi."

Some of the books and movies now being considered part of the genre are old classics, while others were written more recently in direct response to today's changing climate.

"It's a very, very energized time for this where people in literature have just as much to say as people who are in hard science fields, or technology and design fields, or various social-science approaches to these things," said Jennifer Wicke, an English professor at the University of Virginia who will be teaching a course this June on climate fiction at the Bread Loaf campus of Middlebury College in Ripton, Vermont.

The Bread Loaf School of English is mainly for elementary- and high school-level English teachers who can, in turn, take what they learn back to their classrooms to get their students to understand how literature can reflect current events.

"This course gives them a model for creating and imagining English courses that will help the young people whom they teach understand that reading literature, looking at the arts, looking at film isn't something you do as an aside," said Bread Loaf school Director Emily Bartels, also a professor of English at Rutgers University in New Jersey. "It's something you do as you learn how to navigate your own moment in the 21st century."

Climate fiction, a term that emerged less than a decade ago, is now being discussed by academics across the nation and world. Next month, about three dozen academics are expected to attend a workshop in Germany called "Between Fact and Fiction: Climate Change Fiction," hosted by the Hanse-Wissenschaftskolleg Institute for Advanced Study in the northwestern city of Delmenhorst.

The website for the workshop lists some contemporary examples of books that fit the definition: Barbara Kingsolver's "Flight Behavior," about an Appalachian town to which confused monarch butterflies have migrated; Nathaniel Rich's "Odds Against Tomorrow," the story of a mathematician coping with catastrophe in New York; and Paolo Bacigalupi's "The Water Knife," about water wars in the southwestern United States.

But some of the literature now being recognized as cli-fi was written decades, or even centuries, ago. Some of Shakespeare's works focus on humanity's relationship with nature. Works of fiction such as H.G. Wells' "The War of the Worlds" or "The Time Machine" also fit the profile of climate fiction, Bartels said.

Retired Hampshire College Professor Charlene D'Avanzo, a marine scientist who spends her summers in Yarmouth, Maine, is about to publish her first novel, "Cold Blood, Hot Sea," the first of a three-volume series of what she describes as "cli-fi eco-lit novel and amateur sleuth mystery novels" sparked by what she sees as the harassment of scientists studying climate change.

She said that there's much uncertainty in the scientific study of climate change and that readers are more willing to accept uncertainty in fiction. In her first book, the protagonist is an amateur sleuth who investigates the mysterious death of a colleague who was crushed to death by a buoy on a research vessel off Maine.