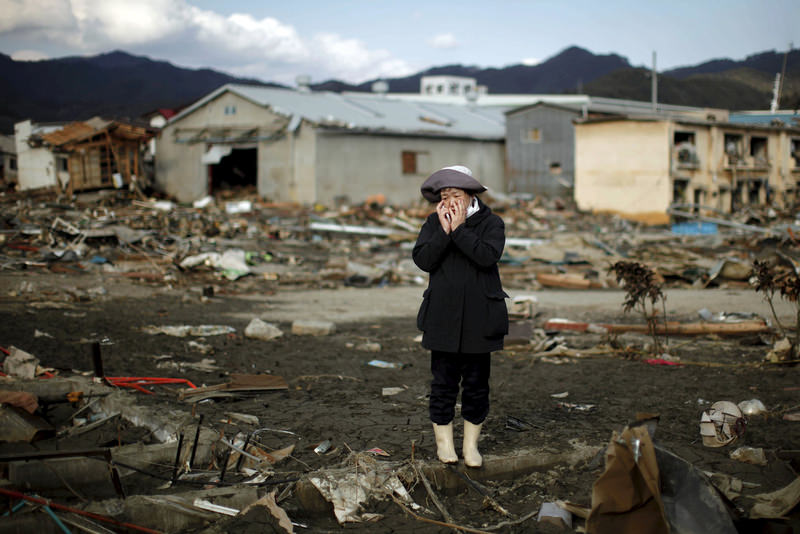 by German Press Agency - DPA
Mar 08, 2016 12:00 am
Japan's northeast bears few signs of the devastation of the tsunami that struck the island country five years ago. Mountains of debris are no longer visible, but locals are struggling to rebuild their lives. It took Keiko Habu nearly five years to regain enough health to work full-time again on her family's strawberry farm after a tsunami struck the small northeastern Japanese town of Yamamoto. The family-run business and their laid-back lifestyle were violently interrupted on March 11, 2011, when the waves swept away their house and flooded the greenhouse. "I did not feel well for most of the last five years after witnessing the destruction from the tsunami, which was triggered by a magnitude-9 earthquake," Habu recalled.

The twin natural disasters devastated coastal areas in the northeast, killing about 18,500, including 636 in Yamamoto. The Habu family survived after a tsunami warning prompted them to flee the farm and spend the night in their car up a hill. "The next day, my husband went to see our house in the coast area and came back, saying, 'Nothing is left,' she said.

Then another tragedy struck Habu when her father killed himself after having to leave his home following the triple meltdown at the nearby Fukushima Daiichi nuclear plant. Her father was struggling with deep depression after the evacuation, she said. Habu herself has overcome her own reaction to the accident, but said: "There are still many people who cannot approach the coast [out of fear]."

That does not surprise aid worker Fukuharu Fukui, who managed to reach Yamamoto days after the accident. "The catastrophic damage in the town was beyond imagination," he said.

Fukui, a church member from Tochigi, north of Tokyo, set up a volunteer base in the town and then established a nonprofit group for disaster relief. "This used to be a residential area and streets were mostly lined with houses," he said, pointing at the now razed area. The tsunami uprooted many greenhouses in the town known for quality strawberries. Habu's survived but it was badly damaged. "I instantly thought we would be no longer able to grow strawberries here," she said. However, with the help of her sons' friends and colleagues, they cleared the debris and mud from the 3,000-square-meter greenhouse, she said, and the Habus were able to resume their business six months after the calamity. "When we had the very first strawberry, I cut it in half and let our two grandchildren eat it," she said. The central government spent $170 million to rebuild greenhouses in Yamamoto and the neighboring town of Watari, where strawberries are the main local produce. But the recovery has been slow, locals said. The local chamber of commerce said the economy in the area has not recovered from the 2011 disaster, according to a recent survey by the Tokyo Shimbun newspaper. Chambers across the three affected prefectures of Iwate, Miyagi and Fukushima have said the same. Only 18 percent of them said they have recovered to pre-disaster conditions, with 52 percent saying their local economy is still in a worse condition than before March 2011.

Fukui said the next step is how to further revive the region's economy. "We need to take measures to create more jobs for locals," said Fukui, whose group has started to help locals produce mulberry tea.

In the city of Rikuzentakata, another hard-hit area, 150 kilometers north of Yamamoto, vineyard owner Akihiro Kumagai was able to ship his own wine for the first time late last year. "I wanted to start wine production even before the disaster," said the 32-year-old resident who first returned to his hometown seven years ago after working at a restaurant in Tokyo. He didn't expect the 2011 tsunami to reach his vineyard 2 kilometers inland, but the water damaged machines at the factory and washed away vine seedlings Kumagai had just planted. An army of volunteers spent one-and-a-half months shoveling mud out of the factory and the vineyard. Kumagai, who said he did not even know there was a word for "volunteer" before the incident, was able to restart his business four months later. He said his hillside facilities escaped the disaster relatively lightly, compared with the damage to the rest of the town of Rikuzentakata down in the valley.

Around 1,750 residents, or 7 percent of the population, perished in the disaster, and the city center was flattened. Kumagai said he hopes his wine can contribute to rebuilding the region's economy. "While working in Tokyo, I realized that this region has an abundance of quality seafood," he said. "I hope to make wine that complements the regional delicacy and help create a new gastronomic culture."