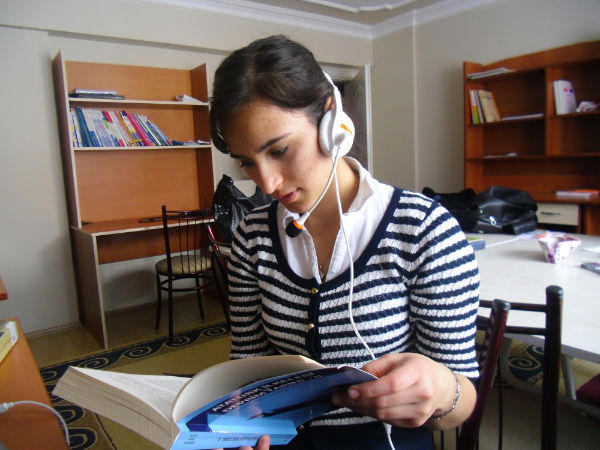 Ten years after the project "Konuşan Kitaplık" (The Talking Library) began, it continues to attract the interest of visually impaired readers in Turkey, featuring roughly 5,000 books and volunteers who read the books and record them digitally.

The library which is designed to meet the needs of readers who are visually impaired by 40 percent or higher features a wide range of resources including novels and course materials, as well as digital audio books which are available to download on mobile devices. Sema Turan, a staff member from Turkey's National Library Directorate, said that visually impaired users benefit immensely from the project because they can easily access the books they need for their courses of study. "We help university students with visual impairment tremendously. Since these students are not able to find the audio course books they need, our project fills an important gap for them," Turan said.

The books for the project are chosen by readers who send their requests to project staff members. Then, volunteers who have successfully submitted applications that comply with elocution standards are accepted and read the books for the visually impaired. Project volunteers include theater artists, as well. "A number of theater artists have recorded books for our users. They will help us record more in following months," Turan continued, noting that the aim of the project is to reach as many users as possible. The project was recently introduced at the CNR Book Fair between March 4 and March 13. "The more users we receive, the more we will be happy to help them," she said.

At the book fair, a large section of books were allocated for the project stand where project staff members gave presentations to introduce the Talking Library. "We asked visitors to encourage friends and family members who are visually impaired to utilize this library. Raising awareness is an important part of this project," she said. Users can become a member of the library on our website, www.konusankitaplik.mkutp.gov.tr.