Myanmar fishing slaves in Indonesia to go home, 'tip of the iceberg' 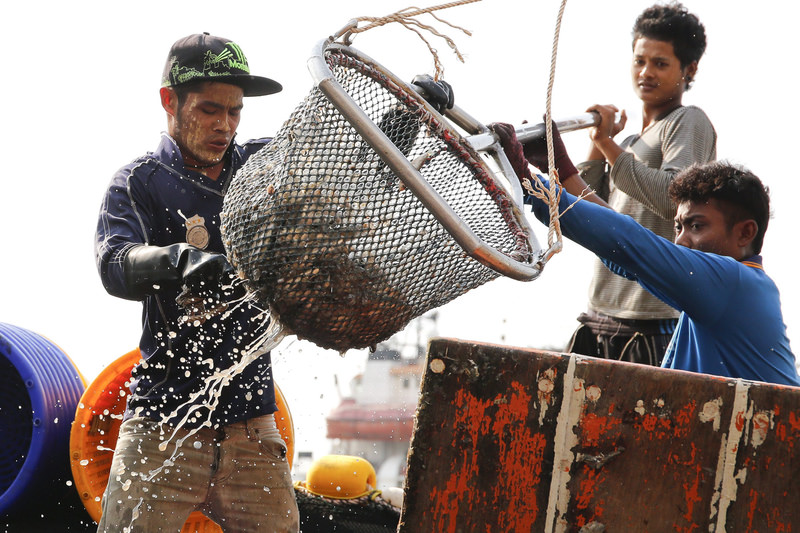 A final group of 24 fishing boat slaves is preparing to return home to Myanmar this week from Indonesia, aid workers said at a trafficking meeting in Bali, one of them calling the 1,200 slaves repatriated since last year the "tip of the iceberg".

Hundreds of migrants seeking work have been exploited or enslaved aboard fishing boats in Southeast Asian seas in recent years, their plight emerging in a growing number of media and other reports.

These reports, and a shift in Indonesian government policy in 2014, brought the scale of the problem to light, including the fact that many trafficked and enslaved fishery workers were stranded in Indonesia.

Some of the 24 Myanmar nationals expected to leave on Thursday have not spoken to their families since leaving Myanmar in search of work a decade ago, only to be duped into years of brutal, unpaid labour on fishing vessels. "The departure of these men will bring to an end one chapter of this tragic story," Mark Getchell, head of the International Organization for Migration in Indonesia, said on Tuesday at the sixth ministerial conference of the Bali process on people smuggling and trafficking. "But all the evidence suggests this is the tip of the iceberg, and much work needs to be done across the region to better protect the rights of migrant workers and ensure there is no repeat of the abuses they were subjected to over so many years." Southeast Asia, one of the world's largest sources of seafood, has struggled to control "illegal, unreported and unregulated" fishing. In late 2014 Indonesia issued a moratorium on foreign vessels fishing off its coast, forcing several to port and leaving hundreds of men stuck in the port of Ambon, and blowing up boats fishing illegally in its waters. Separately, media reports described hundreds of fishing slaves kept in captivity, buried in unmarked graves or marooned on Benjina, an island in eastern Indonesia.

The IOM, at the request of Indonesia and with support from Australia, has identified, assisted and repatriated more than 1,200 trafficking victims from Ambon and Benjina, the organisation said in a statement. Most of the men are from Myanmar, some from Cambodia and Thailand.

The IOM said it "strongly suspects" an additional 800 foreign nationals repatriated by fishing companies and through other means were also trafficking victims.

"No effort should be spared to pursue the companies involved and demand they compensate all of these unfortunate individuals who lost years of their lives to traffickers, solely to increase the profit margins of these companies," Getchell said. The IOM, acknowledging the need for labour on fishing boats, called for regional governments to come together to address this issue in forums like the Bali process conference, said Paul Dillon, IOM spokesman in Indonesia. "Let's find a way to address the labour needs in a way that ensures the men and women are treated with respect, suitably compensated for the hard and dangerous work they do, and create a system so consumers can go to buy fishery products safe in the knowledge that people were not enslaved," Dillon said.