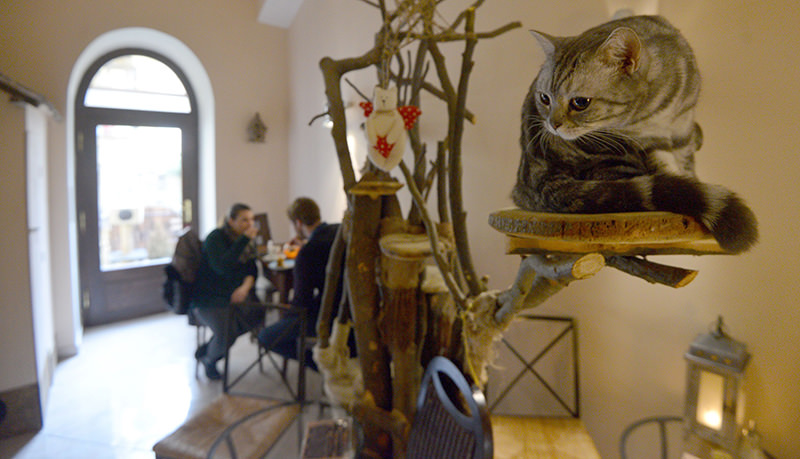 Nox sniffs curiously at a cup of creamy Vienna coffee and a plate of chocolate cake, then leaps off the table into the lap of a young woman, an afternoon visitor to Prague's oldest cat cafe.

The jet-black cat is one of eight that Kockafe ("kocka" being Czech for "cat") has acquired from a Prague animal shelter to help its customers feel cosy and relaxed.

"Cats radiate calm and purring is very pleasant, people simply like it," says Jana Parizkova, a 25-year-old tourist guide who opened the cafe in the Czech capital along with her mother and sister.

"Cats bring people together -- guests who don't know each other have something to talk about, which is great," she tells AFP, surrounded by cats leaping on the bar or resting by the window.

Already popular in Japan, Taiwan, and other parts of Asia and Europe, cat cafes are booming across the Czech Republic, with a dozen having popped up since the summer of 2014. 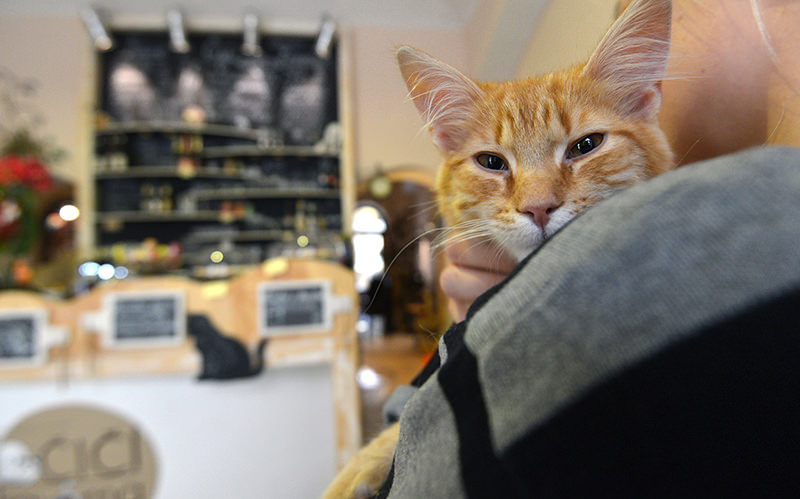 "My wife and I opened the cafe a year ago. We had seven cats at home and now we have nine here," says 45-year-old Ivan Herak, a former manager, who runs one of the four cat cafes in tourist-magnet Prague.

Unlike Parizkova, Herak relies on British marbled cats, which he breeds himself.

"I need cats that like being caressed, that aren't afraid of people, while cats from a shelter are often easily frightened," Herak says, stroking a big tomcat with a bell on his collar and calling him "Darling".

At the Kockafe, Parizkova has taken several stray cats off the street, including a kitten she found outside her cafe on the day it opened, and allows guests to adopt its felines.

"A cafe isn't an ideal place for a cat -- that's why we have cats from a shelter, their experience is so terrible that they find the cafe OK," she says with a smile.

But she admits it is difficult to find cats suitable for cafe life. The felines must be "completely relaxed and composed in order to handle the bustle here."

Among the Kockafe's customers, Karolina Brabcova has taken a kitten home, while her friend Lucie Kubrova, a student, already has a cat but still frequents the cafe to soak up its unique atmosphere.

"Cats make it far more pleasant -- you don't just gulp down your cup of coffee and leave; instead, you sit, play with the cats and spend more time here," Kubrova says over a plateful of pizza, graciously ignored by Nox and his peers.

Herak says about 80 percent of the people who come to his cafe already have cats of their own at home.

"They are cat lovers, they know the cats will be on the table and curious about their plates, so to speak, but they don't mind."

But he adds some clients find the idea of pairing coffee and cats unappealing.

"When we opened the cafe, a lady in her sixties came over and asked if we really sold meals made from cat meat. That, you've got to admit, was shocking."