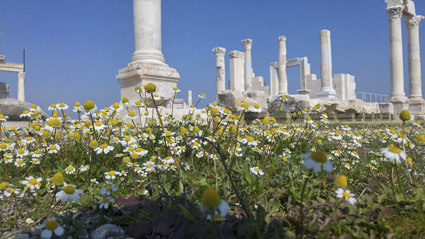 by Daily Sabah Mar 25, 2016 12:00 am
Denizli Mayor Osman Zolan has told reporters that the restoration currently being conducted in the ancient city of Laodicea was awarded the European Union Cultural Heritage Jury's special award.

Zolan said that following its inclusion on the UNESCO's List of Intangible Cultural Heritage, the ongoing restoration as part of the World Heritage Laodicea Awakens Project was awarded the EU Prize for Cultural Heritage by Europa Nostra. Saying that the preservation, conservation and restoration techniques for the church were appreciated, he recalled that the excavation and management responsibility of the ancient city was handed to the Denizli Metropolitan Municipality with a protocol prepared with the Culture and Tourism Ministry. He also said that the prize is the proof that handing over ancient cities to local authorities enables historical value to be unearthed in a faster and safer way.

"Laodicea has been taking firm steps toward being Turkey's brand value. Included on the UNESCO Intangible Cultural Heritage List in 2013, our ancient city was granted a Tripadvisor Certificate of Excellence. Now we are very proud of wining the jury's special prize by Europa Nostra, which awards successful projects around the world regarding the preservation of historical and cultural heritage." Zolan said, adding that the prize would be granted in a ceremony in Madrid in May.

As part of the project, the bishops' house, church archives and roads leading to the church have been restored; surviving walls and antique structures have been preserved; arrangements for visiting have been made for the church, which is one of the Seven Churches of Asia mentioned in Revelations. The Southern Aegean Development Agency (GEKA) donated TL 750,000 ($260,160) for the project.
RELATED TOPICS