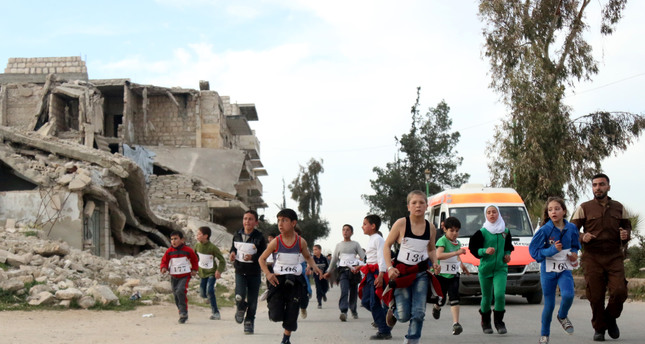 by Anadolu Agency Mar 25, 2016 12:00 am
Elvan, a nongovernmental organization, along with the Maarretu'n-Numan Sports Club held a marathon for children in the war-torn city of Idlib in northwestern Syria to help cheer them up. Based in Idlib's Maarretu'n-Numa district, Elvan offers psychological support to Syrian children and organized the marathon where 50 children under the age of 10 participated.

Abdüllatif er-Rahum, the head of Elvan, told Anadolu Agency (AA) that the marathon was held to make children, who have been greatly suffered from the ongoing conflict, happy. Most of the participating children were born right before the war broke out, Rahum said. The marathon took place secured by the civil defense and police forces.

In March, the Idlib province was attacked, which left several shops destroyed, while many of the injured admitted to hospitals suffered serious burns, according to AA. Syria has been locked in a vicious civil war since early 2011 when the Bashar Assad regime cracked down on pro-democracy protests with unexpected ferocity. Since then, more than 250,000 people have been killed and more than 10 million displaced, according to the United Nations.
RELATED TOPICS