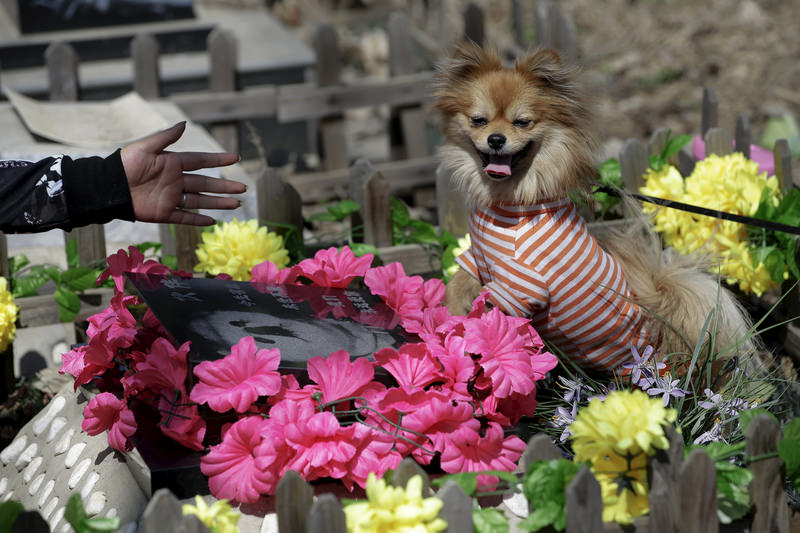 by Apr 01, 2016 12:00 am
China celebrates the Qingming tomb-sweeping festival on Monday, with much of the ceremonial ritual of honouring the dead these days not geared towards beloved relatives, but beloved pets. Once banned by Communist leader Chairman Mao Zedong as a bourgeois pastime, having a pet has now become a symbol of financial success in China, which has seen the emergence of dedicated pet cemeteries in the last few years.

Qingqiu was among tomb-sweepers at one such Beijing cemetery to pay tribute to her fluffy Pomeranian "Huoban", who died at the grand old age of 15.

"It's like a heaven for pets," Qingqiu said of the Baifu Chongwu Tiantang cemetery, or "Hundred Fortune Pet Heaven".

"Huoban was very smart. He could pick up moves I taught him very quickly... Visiting the cemetery gives me a feeling that we did not lose our connection." She said Huoban had witnessed her fall in love, get married and have a child. "I want to meet you again in the next life" is engraved on his tombstone.

Tian Peiheng, 66, paid respects at her Pomeranian's grave, along with her husband and daughter.

"I have deep feelings for her... After she was gone, it was just like losing my own baby," Tian said.

Beyond the intimacy of such tomb-sweeping visits, the pet cemeteries are also making money. A single plot at Baifu costs between 2,000 and 5,000 yuan ($308 and $770) for 30 years, with an additional yearly management fee of 50 yuan ($7.70), according to gravestone designer Zhang Youwang. Gravestones can cost anything between 2,000 and 20,000 yuan.

"For those who do not have dogs or other pets, it's difficult for them to understand," Zhang said. "...but pets are just like people. They are people."

Such sentiment is relatively new in Communist Party-ruled China. Pets have become fashionable in major cities in line with rising incomes. Up until the 1980s, pet dogs were illegal in Beijing.

In some parts of China, dogs are still being eaten and transported in overcrowded crates to events such as the annual Yulin dog meat festival in southern Guangxi province which triggers international and local protests. China's growing middle class has started to fight what it sees as barbarous abuse of man's best friend.