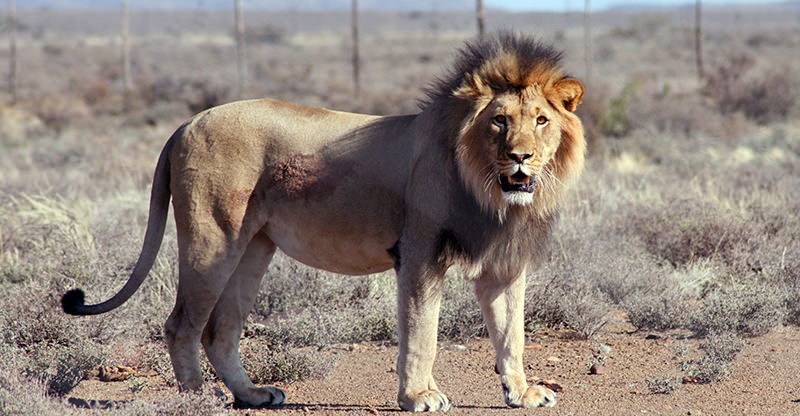 In this July 23, 2015 photo provided by SANParks, Spook the lion is seen after he was recaptured after escaping from the Karoo National Park near Beaufor West, South Africa (AP Photo)
by Apr 01, 2016 12:00 am

A lion that escaped from a South African national park five days ago, killing several domestic animals and sparking an internet campaign to save its life, has been captured, a spokeswoman for South African National Parks (SANParks) said Friday.

The three-year-old male known as Sylvester left Karoo National Park in the south-west Sunday by passing under an electric fence. It then wandered 20 kilometres away, killing a cow and three sheep.

Locating the lion thanks to the collar it was wearing, the wildlife authorities initially said they were considering the possibility of putting it down. The plan sparked an internet petition to save it that was signed by more than 2,000 people.

The lion was finally darted from a helicopter Thursday. It took us almost the whole day to ... get a positive visual sighting of it in mountainous and bushy terrain, SANParks spokeswoman Wanda Mkutshulwa said.

The lion was then carried on a stretcher for three kilometres before being placed inside a vehicle and driven back to Karoo National Park, where it is currently being kept in an enclosure.

Sylvester is quite skittish after its adventure, the spokeswoman added.

The lion had already escaped from the park last year, killing 26 sheep, a cow and an antelope.

Mkutshulwa denied that the decision to dart rather than kill it had been influenced by the internet campaign.

The wildlife authorities were considering how to keep the lion from escaping again, including the possibility of integrating it in a pride, she said.

If it turned impossible to keep the lion inside the park, it might be donated to a state-owned or a private wildlife area, the spokeswoman added.

The Karoo National Park, which measures 98,000 hectares, has about 12 lions.