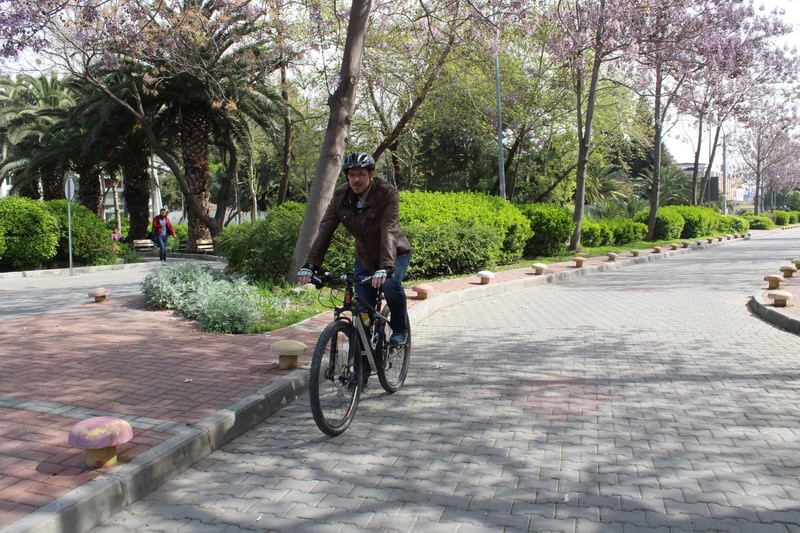 by Apr 05, 2016 12:00 am
A social media group "İzmir'de İşe Bisikletle Gidenler" (İzmir People Going to Work by Bike) encourages local residents to cycle to work. The number of members in the group has been around 5,000 people.

The group was initially established by İzmir-based cyclists that gather to go biking on the weekends or in the evenings. Coming from different occupations, the group members, who find cycling easier and healthier than driving, ride their bicycles in their suit or uniform. They put their bags on the back of their bicycles and set off for work.

Among the cyclists is Hüseyin Tekeli, a lawyer hailing from the city's Bornova district, who cycles almost 8 kilometers every day to the Alsancak neighborhood. Tekeli stores his bicycle inside his workplace, and he only uses public transportation or his personal car on rainy days or when there are other forms of inclement weather. Tekeli believes that cycling is the most environmentally friendly and healthy form of transportation in the world. "If I go to work by car, then I will be stuck in traffic, get frustrated and will be late. I do not waste my time or pay parking fees when I bike to work, but more importantly, I exercise for an hour each day," he said, adding that more initiatives are being undertaken to improve the conditions for cyclists and biking lanes around the city. "Cycling does not harm the environment. In the past, cycling was not as common," Tekeli added, but cycling has now become more popular.

Mehmet Koyuncu of the Ege University Faculty of Letters and Science is another group member biking to work. He first drops his child off at school and then goes to work. He said more people encounter traffic problems, which "is why we try to encourage cycling around the city."

The group members always support each other and give each other a hand when someone needs a repair or anything else. "Our group does not have a leader. For us, cycling is a lifestyle. It was a leisure activity for some members at first but bicycles are what save us from traffic," he added. Koyuncu also encourages his students to cycle around the city. "My students appreciate my choice of transportation and it makes me feel happy," he said.
RELATED TOPICS