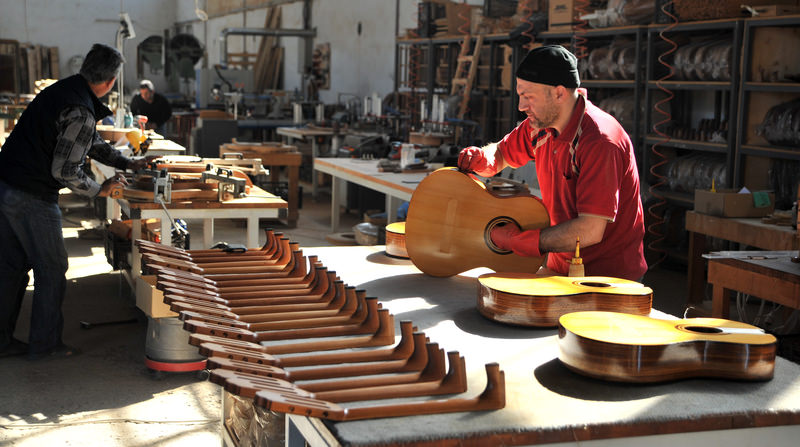 by Anadolu Agency Apr 07, 2016 12:00 am
Muzaffer Yeltekin, a luthier based in the city of Bursa's İnegöl district, exports his flamenco guitars to dozens of countries, including Brazil, Italy, Spain, Germany, Canada, Venezuela, Mexico and Argentina. He began making guitars in the 2000s due to the demand from Spanish customers and has been making classical and flamenco guitar ever since.

Taking care of every detail in guitar production, Yeltekin said: "I provide the necessary materials but purchase strings and drills like other guitar makers," adding that his guitars' bodies are made from local wood. Yeltekin said that they generally use Caucasian spruce brought from the city of Artvin on the eastern Black Sea coast. "I work both as a guitar maker and supplier.

For the back of the guitar, I prefer to use walnut. Alternatively, we can use Brazilian rosewood or other rosewood species. Rosewood is the best material for a guitar," he said. Each year Yeltekin can make 50 to 100 guitars. "We could make more guitars, but prioritize quality. We are currently deciding if we can produce better guitars at an affordable price in the next three to five years," he said.
RELATED TOPICS