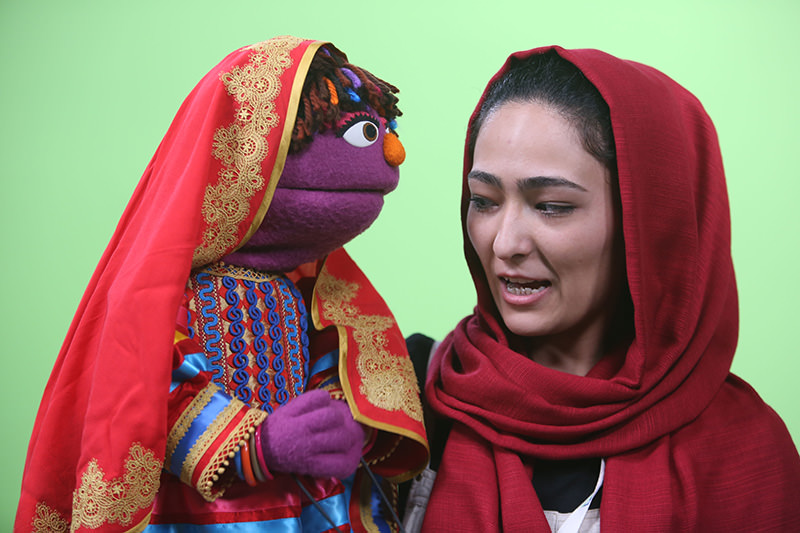 Zari will wear a headscarf with her school uniform, which unlike that for girls across Afghanistan will not be black Sesame Street characters do not wear black but pale blue. Otherwise the eternal pre-teen will be mostly bare-headed.

She is a "universal character," according to the team in Kabul that helped create Zari as the first Afghan character on the long-running children's show, already the most popular in Afghanistan where children have taken Grover and the Cookie Monster to their hearts.

Zari whose name means "shimmering" in Afghanistan's two official languages, Dari and Pashtu made her debut on Thursday on the fifth season of Afghanistan's local production of the show called Baghch-e-Simsim, which translates as Sesame Garden.

She joins Sesame Street's multi-cultural line-up, which includes Muppets in Bangladesh, Egypt and India who each do separate segments on their own national programs.

Zari, too, will have two segments in each show, one on her own and another in which she interviews people from a wide range of backgrounds aiming to educate her young audience about such things as the importance of study, exercise and health.

The goal in bringing Sesame Street to Afghanistan had always been to eventually have an indigenous character, said Clemence Quint, program manager for Lapis Communications, the Afghan partner of the Sesame Street Workshop, which has produced Sesame Street in New York since 1969.

The two production houses worked together with Afghanistan's Education Ministry to develop a Muppet that fit into every Afghan's vision of their nation, while still conforming to the values that have made Sesame Street one of the world's most successful children's television programs, she said.

Zari was made in New York. Her costumes incorporate fabrics and designs from all Afghanistan's ethnic groups predominantly Pashtoon, Tajik, Uzbek and Hazara.

Her skin and hair were also designed to ensure that Zari cannot be identified with any specific ethnicity, but rather with all of them, Quint said. "Every Afghan can relate to Zari," she said.

"Zari is a female because in Afghanistan we thought it was really important to emphasize the fact that a little girl could do as much as everybody else," Quint said.

Afghanistan has been at war for almost 40 years, since the 1979 Soviet invasion and the subsequent mujahedeen war that lasted a decade. That was followed by a devastating civil war, in which warlords drew lines based on their ethnicity and killed tens of thousands of people in Kabul alone.

The Taliban took over in 1996, and their five year rule was one of brutal extremism in which they banned women from work and girls from going to school, confining them to their homes. The radical Taliban regime was forced from power by the 2001 U.S. invasion that ushered in a democratic experiment and billions of dollars in international aid to rebuild the country.

Part of that project was the creation of a vibrant Afghan media sector, as well as repairing the education system and getting girls back to school alongside boys. The number of children in school grew from 900,000 in 2001 to 8.3 million in 2011, according to figures from the U.N. assistance mission to Afghanistan. UNAMA says girls account for 39 percent of the total up from near zero under the Taliban.

However, Afghanistan is still an impoverished country, with only 60 percent of its children in primary or lower secondary schooling, according to a January report by UNICEF on children living in conflict zones.

In Sesame Garden, and particularly in the character of Zari, the sectors of media and education merge. Quint said the show has "the highest awareness among children's television shows in Afghanistan, at 86 percent, and is cited by primary caregivers as children's favorite program by far."

It targets children aged 3 to 8 years old slightly older than the U.S. target group as access to formal education is limited for many Afghan children for a range of reasons, including the war and religious and cultural prejudices against girls' schooling.

While television is largely restricted to urban areas, Sesame Garden is also broadcast on radio, stretching its reach to most of the country.

The joy in working with Zari is clear in Mansoora Shirzad's voice as she brings Zari to life, holding the puppet above her head and wishing viewers a happy World Peace Day and happy International Children's Day for an upcoming episode.

Describing Zari as "sweet," Shirzad, 20, said the new character "will have a positive impact on our kids, will make the program interesting and will bring some new color to it, enabling us to convey the messages that our children need to know."

"I am very happy to be here in Afghanistan," Shirzad said in her Zari voice. "It is a very good place, I have made a lot of friends, I enjoy myself a lot when I am with my friends in Baghch-e-Simsim."
Last Update: Apr 09, 2016 11:48 am
RELATED TOPICS