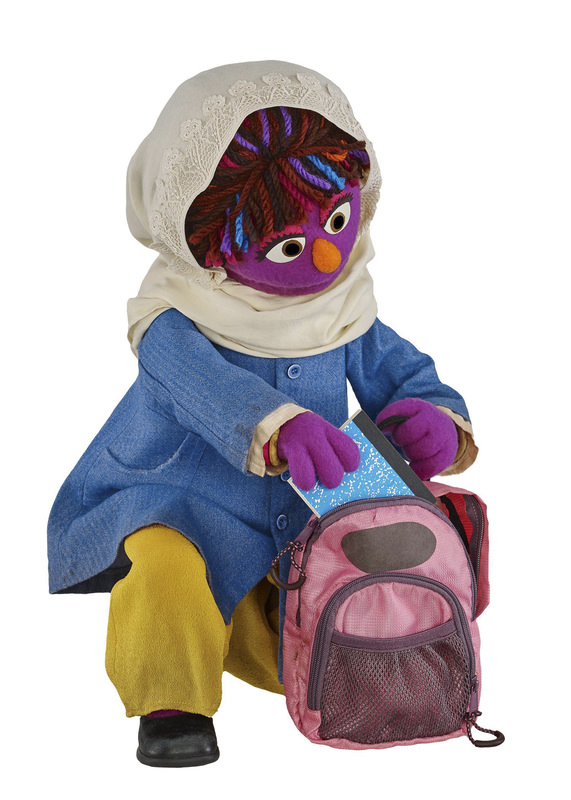 by Apr 16, 2016 12:00 am
With purple skin and an orange nose, her multi-colored braids wrapped in a headscarf, Zari is "Sesame Street's" first female, Afghan Muppet and she has a message: Girl power. Producers hope the character, who debuted on the local version of the show this month, will provide a much needed boost to gender equality in a country where girls still trail behind boys across the board.

Dressed in traditional garb, Zari, whose name means "shimmering" in Dari and Pashto, is confident and inquisitive. Afghan puppeteer Mansoora Shirzad said she hopes the Muppet will become a role model for young girls and send messages of empowerment to kids in the country. "Our goal is to entertain children and educate them," Shirzad told Agence France-Presse (AFP) at the "Sesame Street" recording studio.

She said she hopes 6-year-old Zari will "bring new color to the show and enable us to convey our message," her eyes lighting up as she speaks.

Known in Afghanistan as "Baghch-e-Simsim," or Sesame Garden, the program debuted in the country in 2011 and is the most popular children's series on television today. Partly funded by the United States aid agency USAID, the show features segments catered to local issues, and includes dubbed content from other "Sesame Street" versions including from Egypt, Bangladesh, Mexico and Russia.

For her part, Zari - who debuted on April 7 and has appeared in three episodes so far - has a full agenda this season. She will promote the virtues of exercising and playing sports, speak to a female pediatrician about how to become a doctor and will remind Afghanistan's youth to use the traditional Islamic greeting - "as-salamu alaykum" (peace be upon you) - with friends.

The idea of a female role model on television - Muppet or otherwise - may seem prosaic to outsiders, but in a country where millions of girls were excluded from schools during the 1996-2001 Taliban regime, it remains a daring blow to the status quo. And though progress has been made on some education fronts, girls still trail boys when it comes to school attendance, and women's literacy continues to trail men's - 24 percent of females can read compared to 52 percent of males, according to UNESCO.

"Being a girl can be very difficult in Afghanistan. You face so many restrictions in your life, and we have chosen a female character for 'Sesame Street' [because] we wanted to show girls can be as good as boy and girls are a key factor for promoting education," said Massood Sanjer, director of the TOLO channel, which airs the program.

For Shirzad - one of the few women in Afghanistan's male-dominated entertainment industry - playing Zari provides a welcome escape. "When I play Zari, I absolutely love it and have a great time," said Shirzad, who is also studying Fine Arts at Kabul University. "I forget any problems I'm going through and just enjoy it."

Now in its fifth season, "Sesame Street" is hoping to continue captivating young minds in the conflict-torn country, and some say it's likely to do so. "TV plays a very big part of people's lives and with that you can easily teach kids ... 'Sesame Street' has worked throughout the world and definitely worked for the past four season in Afghanistan," Sanjer said.

The show's creators are silent on whether Zari will be joined by other Afghan Muppets in seasons to come. But for now, children in Afghanistan can enjoy seeing one of their own on the screen for 26 new episodes this season.
RELATED TOPICS