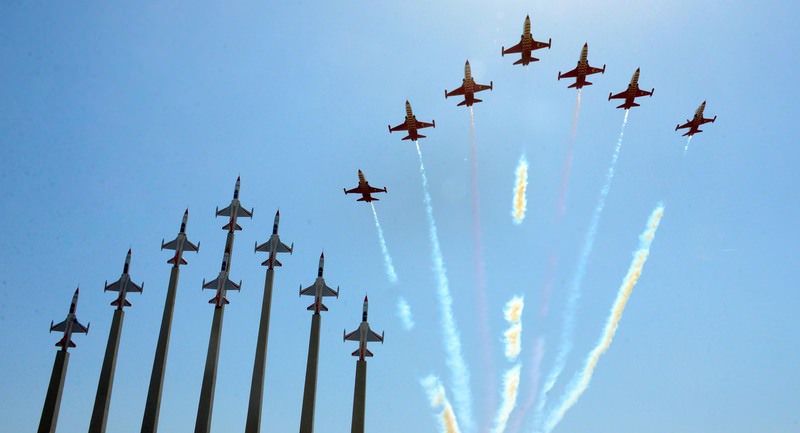 by Anadolu Agency Apr 18, 2016 12:00 am
Turkey's biggest aviation park named "Türk Yıldızları Parkı" (Turkish Stars Park) opened in central Konya province on Saturday with a stunning aviation performance by the Turkish Stars, the aerobatic pilots of the Turkish Air Forces. Stretching along the Konya-Ankara highway, the new park hosted seven planes from the Turkish stars from Konya Jet Base that impressed visitors with their aerobatic performance. The pilots met with visitors after their performance, attracting great interest in the park. They also received gifts during the ceremony.

Designed around the theme of aviation, the park has an aviation museum, an amphitheater, an exhibition area as well as adventure platforms, recreation areas, a children's area, trekking and sports platforms. Gazebos and picnic areas are also available for families. Two monuments commemorate Vecihi Hürkuş, Turkey's first civil aviator and builder of Turkey's first plane, as well as Nuri Demirağ, an important name in the Turkish aviation industry. Two F-5 jets formerly used by the Turkish Stars are on display, along with an Airbus A300 which serves as restaurant within a pond.

Konya Mayor Tahir Akyürek said the aerobatic pilots on the Turkish Stars team are highly valuable for the Turkish army and Turkish Air Force. Akyürek said that Turkish Stars have become a significant brand for Konya with the park's opening. Recalling that Konya was announced as Islamic Tourism Capital for 2016, Akyürek said that the municipality dedicates the park to all the martyrs who died for the independence of Turkey. "We are making all efforts to make Konya a brand city," he said. Lieutenant-General for Aviation Mehmet Şanver said that the park will keep the name of Turkish Stars alive forever. The opening ceremony ended with a traditional dance performance by a group of students.
RELATED TOPICS