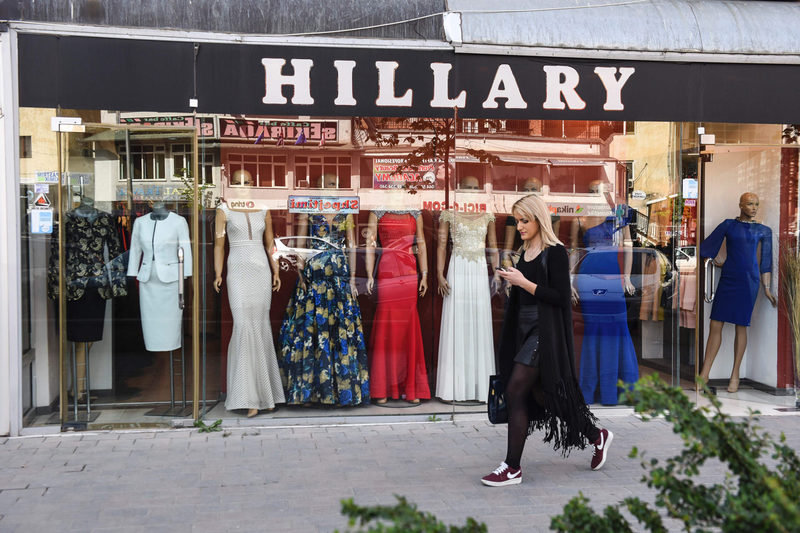 by Apr 21, 2016 12:00 am
A boutique in Kosovo's capital leaves no doubt about its favored candidate in the United States presidential race - the clues are right in its name and on the racks of smart trouser suits. Pristina's Hillary boutique and its sister shop, Hillary 2, are a testament to Kosovo's enduring love not only for the United States but particularly for the Clinton couple. "We wanted to honor the Clinton family in our business," said the shop's 33-year-old owner, Elda Morina-Ymeraga. Her family's first store is on Bill Clinton Boulevard near a huge statue of the former U.S. president, both commemorating his support during Kosovo's struggle for independence from Serbia. And Hillary Clinton offers a strong role model for women in Muslim-majority Kosovo, which can already claim the Balkans' first elected female president and upholds gender balance - in law if not in practice. "She is not only a person who, with her family, has helped Kosovo enormously but she also has unique taste in clothing," Morina-Ymeraga told Agence France-Presse (AFP) at Hillary 2, which is set in a shabby communist-era block from the former Yugoslavia that jars with its sharp suits, bright blouses and elegant dresses. "This was why we started to promote Hillary's style in Kosovo, offering clothes to women that are identical to those worn by Hillary."

In 2010, Morina-Ymeraga had the surprise - and publicity boost - of a lifetime when the 68 year old, acting as then-U.S. secretary of state, paid her main store an unexpected visit during a trip to Pristina. Framed photos hang proudly on the shop walls, recalling the meeting that gave the retailer a "simply incredible feeling." "Every local customer stops by the shop for the first time out of curiosity to ask what I discussed with Hillary. And that curiosity continues after all these years," she said.

Morina-Ymeraga's father set up the first Hillary store in 2002, a few years after the 1998-1999 war between Serbia's armed forces and the separatist ethnic Albanian rebels in its southern province. Serbia withdrew from Kosovo after an 11-week bombing campaign by NATO, backed by then-President Bill Clinton. He later gave strong support to Kosovo's unilateral declaration of independence in 2008 - a move still unrecognized by Belgrade. Bill Clinton was "the first who emphasized the need for change in Kosovo and the need to ban Serbia's rule over Albanians," said Morina-Ymeraga, who imports most garments from Turkey but hopes to create her own "Hillary" label.

Promoting the former First Lady as fashion icon - notably her beloved pantsuits - caught on with Kosovo's female civil servants, politicians and other professionals who make up the store's main clientele. Choosing a red mix-and-match outfit - jacket, skirt and trousers for 50 euros a piece - financial consultant Miradije Salihu, 46, said she wanted clothes that would double as work and evening wear. "If [Clinton] can successfully run her campaign wearing the same style of outfit throughout, why would I not do the same while running my business?" she asked.

If Clinton wins the November race she will be the first woman in charge of the White House, whereas Kosovo chose its first female president, 41-year-old Atifete Jahjaga, five years ago and whose term ended this month. The top diplomatic job, ambassador to the United States, is currently held by a woman and the secular constitution sets a 30 percent quota for female ministers of parliament - putting Kosovo ahead of even Britain and France in parliamentary gender balance. But gender equality is still a far-off goal: A labor force survey conducted in 2014 showed that only 21.4 percent of Kosovo's working-age women held jobs, compared with 61.8 percent of men.

Ulpiana Neziri-Lama, a sociologist, foreign ministry official and former TV news anchor, said the problem was greater in rural parts of Kosovo. But even in cities women faced discrimination. "The public space is contaminated by sexist comments," she told AFP, stressing that "this is very widespread." As Kosovan women strive for more openings, Clinton's determined bid for the White House has struck a chord. "All women of Kosovo should take her as an example," said 22-year-old student Mimoza Nishori outside the Hillary store. "She is a woman with a lot of energy and does her work with competence."
RELATED TOPICS