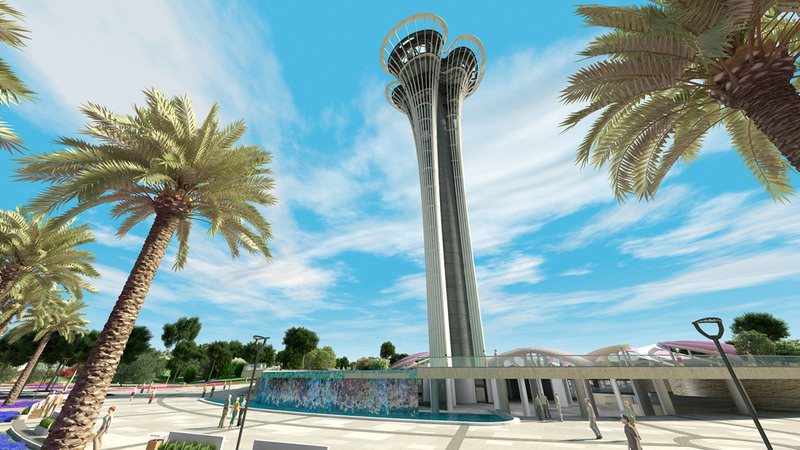 by Daily Sabah Apr 22, 2016 12:00 am
Being thought of as the "Eiffel Tower of Turkey," EXPO Tower will remain a permanent landmark in Antalya. The project, which was chosen from among 127 projects at the competition organized by the EXPO 2016 Antalya Agency and Chamber of Architects, was designed with inspiration from Antalya's "Three Doors" symbol and a palm tree. The 100.7-meter tower has three elevators as well as one closed and two open terraces on the top, from which visitors can get a panoramic view.

Turkey's first Biodiversity and Agriculture Museum will serve as an information bank. Designed in the form of a rod, the museum will present the evolution of agriculture along with "living wall" technology and visuals.

A greenhouse with tropical plants was established to emphasize the concept of sustainability, one of the four sub-themes of EXPO 2016 Antalya, and draw attention to the depletion of the world's rain forests.

EXPO 2016 will address the palate as well as the eye. On Restaurants Street, which reflects the architectural characteristics of Antalya, Bodrum, Diyarbakır, Erzurum, Konya and Trabzon as well as Istanbul's waterfront residences will serve food from these areas.

There is a 6,500-capacity congress center at EXPO 2016 Antalya, which will be a permanent fixture for Antalya with is rich plant life and structures even long after the six-month fair comes to an end. The EXPO 2016 Antalya Congress Center will continue serving after the EXPO as one of the most important congress centers among Mediterranean countries with its latest technology infrastructure systems.

The congress center will host international events, meetings, panels, conferences and stage shows for six months between April 23 and Oct. 30, and the 30th European Regional Conference of the Food and Agriculture Organization of the United Nations (FAO) will be held at the congress center between May 2 and May 6. The agriculture ministers from 54 countries will attend the congress titled "Food Safety."

Along with the national and international congresses, the congress center was prepared to host giant arts events with a main stage of 455 square meters. A 60-square-meter orchestra pit was also built in the main hall of the congress center, which will host cultural and artistic activities throughout EXPO 2016.

The fountains pump water up to 80 meters. While the likes of this system can be seen in Las Vegas, Dubai, China and Malaysia, the water will dance with different types of music from Tarkan's songs to Mehter.
Last Update: Apr 22, 2016 1:04 am
RELATED TOPICS