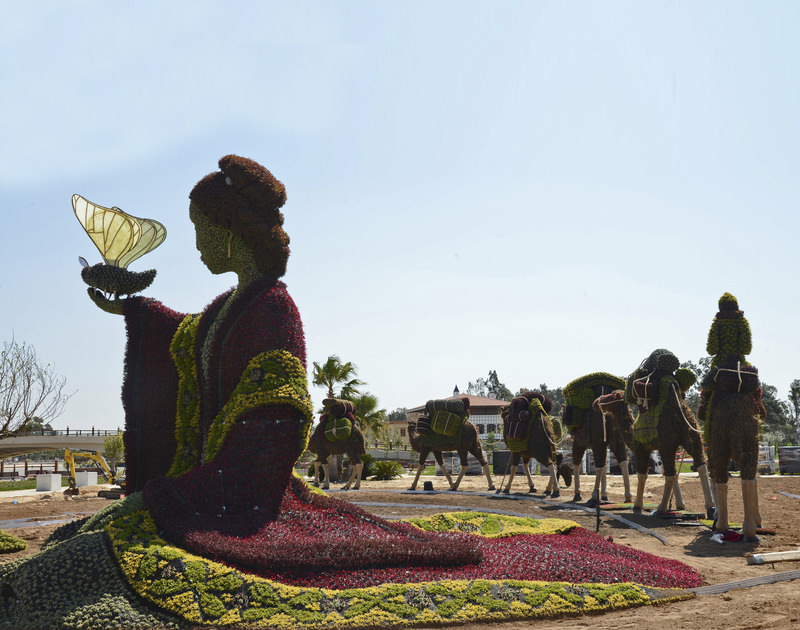 Expected to host more than 8 million visitors, EXPO 2016 Antalya will kick off with the theme 'Flowers and Children' on April 22 with a ceremony attended by President Erdoğan and Prime Minister Davutoğlu

The biggest event after the Olympics and World Cup, the World Botanical EXPO, will open its gates for the first time in Turkey during its 160-year history, this year in Antalya. The EXPO 2016 Antalya will officially open on April 22 in a 121-acre expedition area built in Antalya's Aksu district, remaining open for 191 days.

Opening this year with the theme "Flowers and Children" accompanied by the slogan "A Green World for Future Generations," EXPO 2016 Antalya will be an opportunity for Turkey to introduce its historical and cultural heritage, rich bio-diversity and agricultural and economic potential to the world. National and international concerts, conferences and symposiums, dance shows, musicals, theatrical plays, workshops, national days along with Ramadan activities and street shows will be held for six months. Expecting to host more than 8 million visitors, EXPO 2016 Antalya will become a vital part of the city's cultural dynamic.

The EXPO 2016 Antalya project took nearly three years to complete and cost nearly TL 1.7 billion ($604.9 million). Since the garden traditions of Turkey and other countries will be on display, the planting and green structure of the area was of great importance.Not including bush species, nearly 25,000 trees from 120 species were planted, including a 945-year-old olive tree that was moved from the village of Bademli in İzmir's Ödemiş district and replanted with President Recep Tayyip Erdoğan in attendance, as well as a variety of trees planted by artists. The exhibition area has a 650,000-square-meter green area, 300,000-square-meter walking area and 80-acre lake area.

EXPO with largest number of participants after Osaka

According to the Bureau of International Expositions (BIE), the greatest participation at the World Botanical EXPOs in the A-1 category belongs to Osaka, Japan with 78 countries in 1990.

In addition to the gardens of 51 countries, EXPO 2016 Antalya will also display hundreds of endemic plants with thematic and collection gardens. Endemic and wild plants such as cactus, succulents, stemmed plants, aquatic plants, oats, chickpeas, lentils, wheat, onions, tubers, medicinal and aromatic plants will be on display in the thematic gardens. In the Turkish Biodiversity Theme Track, 565 different plant species from the Euro-Siberian, Persian-Central Asian and Mediterranean regions will be displayed.

Inside the fair, on 15 acres, the evolution and culture around the world will be depicted with 110 plant sculptures which include nearly 1 million root plants, with 1 to 6-meter-tall plant sculptures on which various figures were engraved were built for the project developed by a Canadian firm. In order for the sculptures to look as real as possible, many depictions, including humans, elephants, lions, zebras, rabbits, camels, mammoths, silk farming, the invention of fire and Silk Road caravans were elaborately designed by a 25-person team which included 10 foreigners, including four sculptors. Turkey's first live plant sculpture area was formed with themes such as the birth of civilization in Mesopotamia where the first wheat crop was planted, silk worms, agriculture and plant domestication, rice and bamboo in Asia, the Maasai ethnic group in East Africa and the symbol of hope of the "tree-planting man." In addition to the green areas, the EXPO expedition area also includes the EXPO Tower, EXPO Lake, Turkish Biodiversity Theme Track, Children's Island, Green Bridge, Glass Bridge, Peony Terrace, Agriculture and Biodiversity Museum, Science and Technology Center for Children, Restaurants Street inspired by the housing architecture of Turkey's seven regions, food and drink areas, amphitheaters, art and exhibition buildings, a watermill, conference center and country gardens.

President and PM to open gates together

The official opening ceremony for EXPO 2016 Antalya will be held on April 22 with the attendance of President Erdoğan and Prime Minister Ahmet Davutoğlu. Foreign Minister Mevlüt Çavuşoğlu; EXPO 2016 Antalya president of the board of directors, Food, Agriculture and Livestock Minister Faruk Çelik; International Association of Horticultural Procedures (AIPH) President Bernard Oosterom, Bureau of International Expositions (BIE) Secretary-General Vincente Loscertales, ambassadors and other visitors will also be on hand for the opening ceremony. There will water, sound and light shows during the opening ceremony along with a concert by singer Sertap Erener.
Last Update: Apr 22, 2016 11:57 pm
RELATED TOPICS