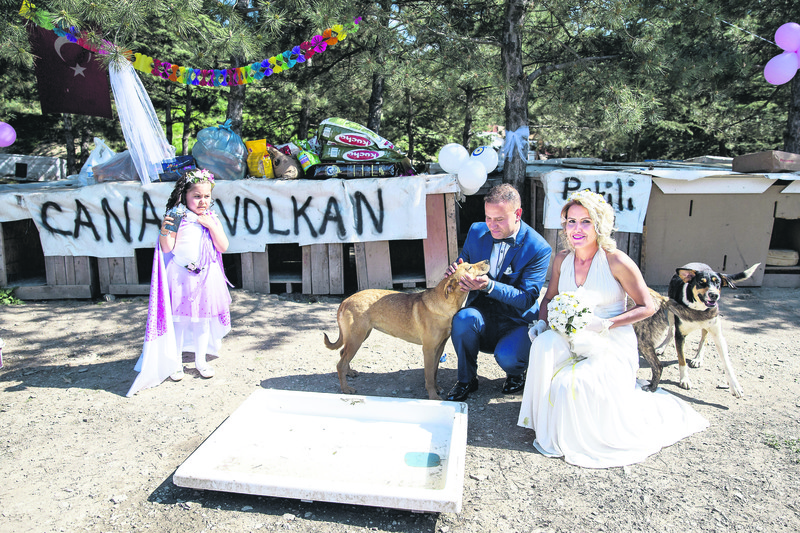 by Anadolu Agency May 03, 2016 12:00 am
For newlyweds Volkan Koç and Canan Kapan who recently tied the knot in Ankara, a traditional wedding was not in their plans. Instead, this couple wanted to help the city's stray animals, so they tied the knot at a local animal shelter. Having met at a local charity event being held for homeless animals, the couple later founded an animal shelter called . "Patiliköy" in the district of Mamak -- the same district where the wedding was held. The groom said that he and his bride wanted to do something different to raise awareness of the conditions faced by stray animals. "Planning this type of wedding was our dream. We are happy to make it a reality," Koç stated.

At first, the couple's relatives criticized their decision to organize a wedding ceremony in an animal shelter. "Some of [our relatives] are afraid of animals and did not like the idea at first. They asked us to reconsider our decision. Many people adore animals but are afraid of them," Koç said. But despite the family opposition, the couple stood firm and kindly asked any guests who are afraid of animals not to attend the wedding. Those who attended brought food for the animals as wedding gifts instead of the traditional gold bracelets normally bestowed on brides in traditional wedding ceremonies in Turkey.

Özge Ünal, one of the guests, said it is her first time attending a wedding ceremony in an animal shelter. Eleven-year-old Doğa Ömeroğlu, the youngest guest to attend the wedding, said that since the wedding, he has visited the shelter weekly and volunteers his time to help the newlyweds feed the animals. "I really like the idea. Every couple can do something like that," Ömeroğlu said.

The couple founded the animal shelter five years ago. "We used to feed animals around İmrahor Valley and were deeply affected by their worsening conditions. At first, we set up a couple of small cottages for them but later set up Patiliköy," Koç said. The couple submitted a land appropriation request to the Forestry and Water Affairs Ministry to establish the shelter on public land due to property rights' issues.
Last Update: May 03, 2016 1:43 am
RELATED TOPICS