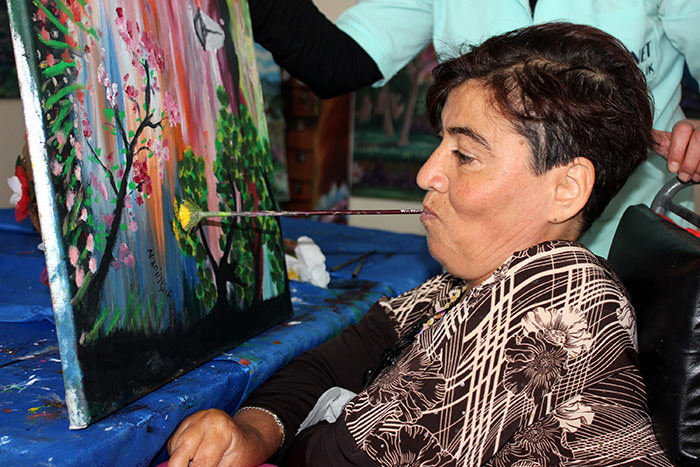 A Turkish woman whose body has been partially paralyzed after an accident when she was 3-years-old has painted more than 500 pieces of artwork in the last nine years.

Narin Işık, who is now 51-years-old, became partially paralyzed after accidentally falling on the ground at the age of 3. A year later, she also lost her father.

Living a difficult life being paralyzed and living without a father, Işık also lost her brother and mother 9 years ago due to illnesses, which made her more paralyzed due to sorrow, disabling her from using her arms and legs.

After these difficult situations, she decided to hold on to life by focusing on painting, a passion she has had since her childhood.

By holding the brush with her teeth, she started painting at a rehabilitation center, located in Turkey's central Yozgat province and administered by the Ministry of Family and Social Sciences, where she has been residing since 2007.

Işık has painted more than 500 art pieces since then, in addition to writing a poetry book.

Being thankful that she can at least still use her mind, Işık said "When I see the mentally disabled here, I get thankful for my situation. I say, at least I can think."

"I love oil painting. I don't get bored if I paint 24 hours a day. It makes me happy and adds a lot to my life. I have had four exhibitions until now. My first exhibition was opened with 300 paintings, the second and third with 300, and the fourth one was with 60 paintings," she said.

"I have completed 9 pieces so far this year. Hopefully, I will have a new exhibition sometime soon."