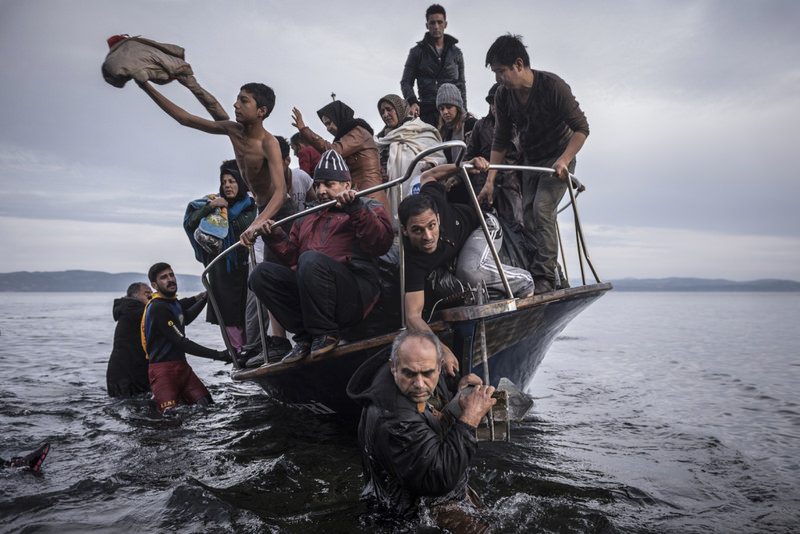 by Daily Sabah with AA May 13, 2016 12:00 am
Russian photojournalist Sergey Ponomarev had waited five months before he photographed a group refugees desperately jumping off a boat having reached the Greek island of Lesbos.

That image, taken in November last year, later won an award at the 2016 Istanbul Photo Awards and a Pulitzer Prize for depicting the worst refugee and migrant crisis facing Europe since World War II.

In an interview with Anadolu Agency (AA) in Istanbul on Wednesday, Ponomarev, 35, said police were waiting for the boat, which was being driven by the smuggler himself.

"Once the smuggler saw the police he tried to withdraw, retreat from the shore and people started to jump [into] the water," Ponomarev said. "I captured exactly that moment when people are throwing their possessions, their clothes to the shore and trying to get out of the boat as fast as they can because they felt the boat was retreating from the island."

The Moscow native said the weather conditions were rough around the time the photograph was taken and that crossing the sea on a rubber raft was very dangerous. "Some of the refugees decided to find a wooden boat or the smugglers found some more reliable vessels for them," he said.

"They had no experience to deal with refugees, with women and kids and exhausted men who had to walk for hours. We as journalists witnessed that and tried to depict those problems," Ponomarev added.

Sponsored by Turkish Airlines and supported by the Promotion Fund of the Prime Ministry, the second Istanbul Photo Award's Photo of the Year award was granted to Syrian photographer Abd Doumany from Agence France-Presse (AFP), for a powerful image showing a deep well of emotion in the eyes of a wounded boy, encapsulating the horror of the last several years in Syria. Ponomarev's photograph titled "Refugees," taken for The New York Times, won first prize for Single News while Santi Palacios's photo, "Lives at Risk to Reach Europe," taken for Getty Images, won the first prize for Story News.

Ponomarev is a freelance photographer for The New York Times. He is one of today's finest young Russian photojournalists, best known for his news images from Libyan uprisings and work about Russian daily life and culture. Ponomarev has won many international and domestic photography awards. Since 2003 he has been a staff photographer at the Associated Press - the essential global news network. Born in Moscow, Ponomarev graduated from Moscow State University and Academy of Labor and Social Relations.
RELATED TOPICS