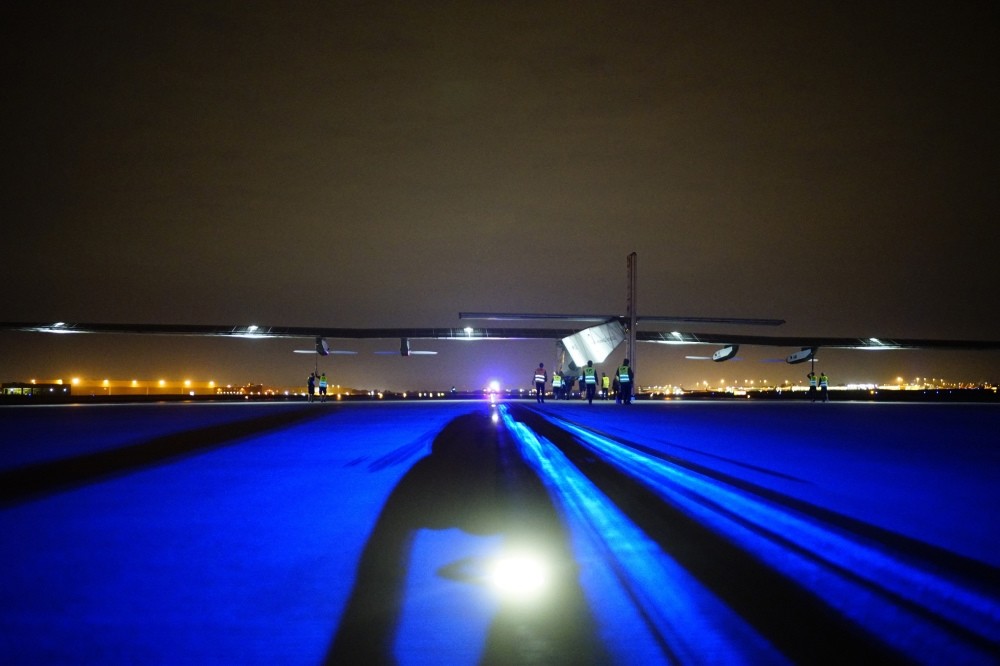 by May 23, 2016 12:00 am
An experimental airplane powered solely by energy from the sun landed in Ohio on Saturday night on the latest leg of its historic bid by pilots and developers to fly around the globe without a drop of fuel.

"People told the WrightBrothers & us what we wanted to achieve was impossible," said Bertrand Piccard after landing. "They were wrong!"

The locale was of special significance to the pilots, as the home base to aviation pioneers Orville and Wilbur Wright.

Amanda Wright Lane, a descendant of the brothers, neither of whom ever married, was on hand to welcome the flight.

With a wingspan exceeding that of a Boeing 747 but an ultra-light carbon-fiber skin and overall weight of a car, the Solar Impulse cruises at speeds ranging from only 34 to 62 miles per hour (55 to 100 kph).

The four engines of the propeller-driven aircraft are powered exclusively by energy collected from more than 17,000 solar cells built into its wings. Excess energy is stored in four batteries during daylight hours to keep the plane flying after dark.

The plane can climb to 28,000 feet (8,500 meters), but generally flies at lower altitudes at night to conserve energy.

Piccard and Andre Borschberg have been taking turns piloting the plane on each leg of the journey. Both have trained to stay alert for long stretches of time by practicing meditation and hypnosis.

Borschberg set a new endurance record for the longest non-stop solo flight last July during a 118-hour trans-Pacific crossing, over five days and five nights, from Japan to Hawaii. He also set new duration and distance records for solar-powered flight. Battery damage sustained during the crossing kept the aircraft grounded for nine months.

The Swiss team's ultimate goal is to achieve the first round-the-world solar-powered flight, part of its campaign to bolster support for clean-energy technologies.

The team hopes eventually to complete its circumnavigation in Abu Dhabi, the starting point for the journey in March 2015.

The two men completed an earlier multi-flight crossing of the United States in a prototype of the solar plane in 2013 as a precursor to their globe-circling quest.