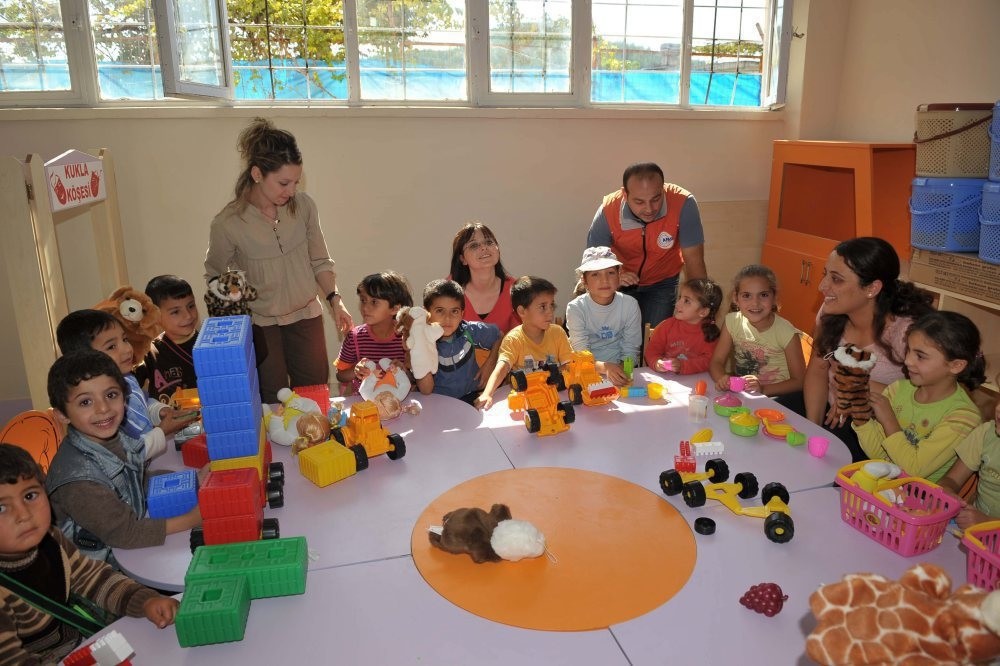 Caring for women and children is a priority in humanitarian disasters. Turkish aid organizations participating in the Humanitarian Summit in Istanbul are helping a number of refugee and poor women, children and orphans both at home and abroad

International humanitarian aid organizations are on the ground providing relief, support and assistance every time a disaster or a humanitarian catastrophe breaks out. From population displacement, weather and natural disasters to the impact of such disruptions on health, education, nutrition and basic shelter, these organizations support people as much as they can. Turkey also has a strong tradition of responding to those in need as the country hosting the largest number of refugees. With this year's International Humanitarian Summit starting today in Istanbul, a number of participating local organizations are carrying out special programs for vulnerable women and children, helping to relieve their difficulties, both in Turkey and other countries around the world.

With over 400,000 Syrian refugees, the southern province of Şanlıurfa has the largest number refugee in Turkey. Social centers run by a number of nongovernmental and governmental organizations are trying to fulfill the needs of displaced Syrians, such as Red Crescent's Şanlıurfa-based social center, which opened its doors in January 2015. With different departments, the center has a "Çocuk Dostu Alan" (Children-Friendly Environment), a project run in collaboration with UNICEF. Targeting refugee children ages 4 to 18, the project works to adapt children to social life, as well as having educational sections like recycling, children's rights, computer literacy and health. Syrian women can also join courses to learn handicrafts, which can help them find work. The center has also opened language courses in Turkish and English. Regular Turkish courses are given by local teachers and each language program covers a 36-hour course each week. Handicrafts courses are given five days a week. The professional and volunteer staff holds family visits and prepares case studies to better understand women and children's needs. The Children-Friendly Environment project is also carried out in Hatay-based refugee camps, which benefits almost 500 children. From movie days and special organizations, refugee children interact and play together.

In Afghanistan, an overwhelming number of children are abandoned, orphaned, abused or are living on the streets. About 60 percent of Afghan children are sent to school and only 28 percent of the adult population is literate. Many children resort to work in order to earn a living for themselves and their family. Afghan children do odd jobs like working as street vendors, water carriers, cardboard collectors, shoe shiners, taxi solicitors, domestic servants and assistants in boutiques. Many international and national organizations, including the Turkish Cooperation and Coordination Agency (TİKA), have opened education centers in Afghan regions. Since March, vocational training courses initiated by TİKA have targeted orphan Afghan girls and vulnerable adolescents in the northern city of Mazhar-i-Sharif. The center also provides Turkish courses and the necessary technical equipment have been delivered to classes. Abdul Samad Karim Harus, the deputy chairman of the United Islamic Council, told Anadolu Agency that Turkey has completed important projects across Afghanistan, through TİKA. TİKA is active in 50 countries where it has offices, but has conducted projects in 140 countries.

Based on World Factbook 2012 data, four of the five countries where baby mortality rate is highest are African. Each year, hundreds of mothers or children lose their lives because of malnutrition before and during pregnancy, due to living in unhealthy conditions and a lack of regular examination. These also give less chance for babies to continue their lives in a healthy way after they are born. "Yeryüzü Doktorları" (Doctors Worldwide), since 2000 has operated as a nongovernmental organization providing humanitarian aid, and recently embarked on a new project to open special clinics in African countries which follow the maternity period of women. The project began in Congo, where since 2015, 700 mothers have lost their lives during childbirth, and babies have died in 30 percent of births. Doctors Worldwide will cover expenses for seven Congo-based maternity clinics which were supported from 2005. The organization will also meet the birth expenses of children born in these clinics.
RELATED TOPICS