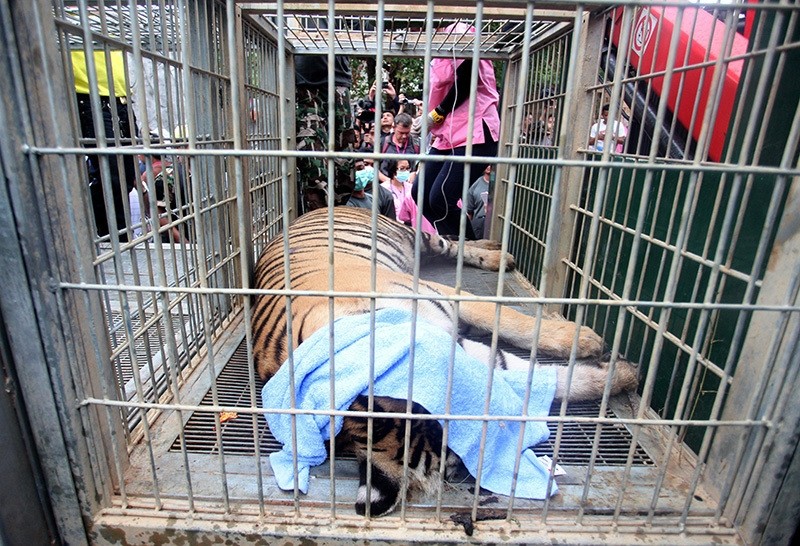 Thai wildlife authorities have discovered at least 40 dead tiger cubs in a freezer vault -- alongside parts of the protected species -- during an operation to remove tigers from a controversial Buddhist temple, local media reported Wednesday.

Dario Pignatelli, a photographer accompanying the officials at the "Tiger Temple" in western Kanchanaburi province, posted pictures on his Twitter account showing rows of tiger cub bodies covered by flies and surrounded by wildlife officers.

The pictures were also published by the Khaosod news website, whose reporter said that a dead boar was also discovered at the scene, where animal intestines, deer horns and a bull skull were found in container.

For years, wildlife activists have accused the temple, whose official name is Wat Pa Luang Ta Bua Yanasampanno, of animal abuse and trafficking tigers and their body parts -- allegations vehemently denied by the temple monks.

The discovery of the dead cubs could possibly serve as evidence that the temple was indeed involved in breeding tigers with the objective of illegally selling their parts, an official told Khaosod on Wednesday.

"This is abnormal. We will investigate this," said Yanyong Lekavichit, head of the wildlife protection regional office.

"We will find out who is responsible for the dead cubs," he added.

Killing an animal is one of the five capital sins for a Buddhist monk according to the 2,500-year-old code of monastic discipline, leading to a member's immediate exclusion from the monkhood.

The discovery came on the third day of an operation to remove around 147 tigers kept at the temple.

Since Monday, 40 tigers were transported from the site to wildlife protection centers, with 107 remaining as of Wednesday mid-day.

Until this month, the monks had resisted attempts by authorities to take away the tigers, but they relented when wildlife officers arrived Monday with an official search warrant issued by a court.

The temple has been closed to tourists since then.

The Tiger Temple is known locally and internationally for its tiger population and for having allowed visitors to walk alongside the tigers, take photos with them and feed the animals.

Conservationists accuse the temple of illegally breeding the tigers and drugging them to appear tame next to tourists for photos.

A recent investigation conducted by National Geographic Magazine also claimed that the temple bred tigers to be sold for parts to smugglers for use in traditional Chinese medicines.

In April last year, the wildlife department had threatened to transfer all the tigers to government facilities on the grounds that the temple did not have the required license, but officials had contented themselves with registering the animals and equipping them with microchips.

An agreement was reached under which the temple was allowed to keep the tigers on the condition that the animals and their offspring were registered as state assets, and not exploited for commercial purposes.
Last Update: Jun 01, 2016 8:54 pm
RELATED TOPICS