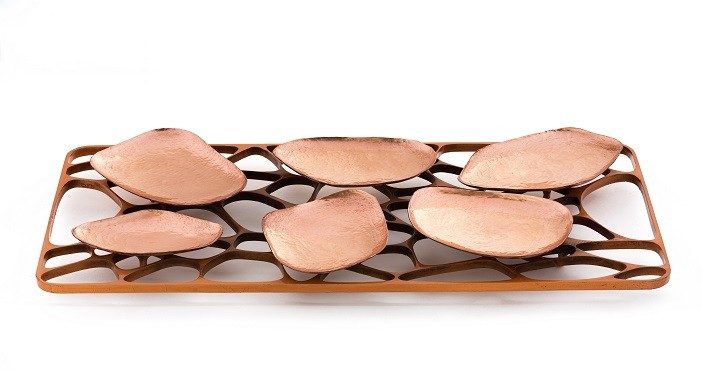 A total of five artists/designers and four craftsmen participated in the project. Designer Atilla Kuzu works with copper.
by daily sabah Jun 01, 2016 12:00 am

Aimed to promote cultural richness, Istanbul Modern supports a project where artists, including designer Hatice Gökçe, use bone, glass, wood, copper and mother of pearl to create unique designs for objects that will be displayed for six months 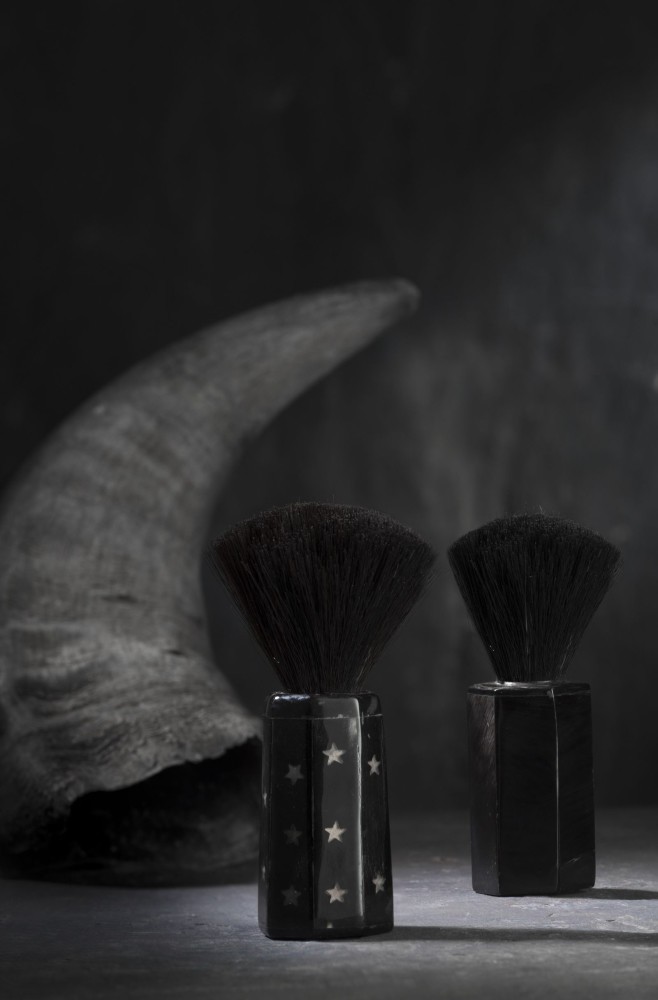 Gökçe worked with pearl, bone and horn craftswoman Fatma Ayran to combine their material specifications and field of interest to design a shaving brush series known as "Karakarga." Gökçe said bone is a very difficult material to work with, adding, "I believe that starting to recognize a material that is foreign to me while experimenting with it really enriches my design approach.''

Having graduated from Mimar Sinan University Faculty of Fine Arts, Hatice Gökçe, in 1998, founded the design studio with her own name and has adopted an experimental style which questions the usual codes in man's fashion and she has chosen to go beyond the ordinary with an avant garde approach. Undertaking the fashion design consultancy of important institutions in Turkey and continuing to produce very special solutions, Hatice Gökçe is the founder and member of Fashion Designers Association (MTD) and she actively takes part in civil society projects. Since 2008, Hatice Gökçe has also been the brand coordinator for Argande, a social responsibility project that is supported by the United Nations. In 1999 Gökçe was awarded the Unique Design award at a competition held in Japan. In a competition Gökçe participated in Turkey in 1998, she was awarded Best Design Award with the collection she designed for men. Gökçe also received very honorable mentions and made the thought of new concepts possible in Turkey with her experimental approach. From 1999 to today the unique designer has been exhibiting her designs in Turkey and in fashion cities in Europe. She has carried out many fashion shows such as "Praise the Light," "Authorize," "Invincible," "The Others", "Karakarga," "Young Turks," "Gilman," "Trnas" and "Voyagers."

Gökçe has presented her project that Istanbul Modern has promoted, called "The Leather Age" first to Beijing and later to Shanghai. Gökçe's "The Leather Age project has been exhibited in Milan Fashion Week in September 2015. Gökçe adopts experimental studies in her men's clothing brand that bears her name and reveals designs with innovative fabrics.

Gökçe came together with pearl, bone and horn craftsmen Fatma Ayran to combine the material specifications and their field of interest to design a shaving brush series called "Karakarga." Gökçe, stating that bone is a really tough material to work with also said; "I believe that starting to recognize a material I am foreign to and experimenting with it really enriches my design approach."

Indicating that she is thinking about using bone in her future collections Hatice Gökçe said, "If a dress was requested from me, I could have made a very unique design using bone but for this project we designed objects to be showcased at the Istanbul Modern Store. After seeing all the possibilities provided by experimenting with different techniques and materials such as bone and horn and after starting to get good results, I know that I can create any impact I wish to create. I want to see the impact of such a hard material will have on clothing design."

Stating that the process of shaping the design project was a very experimental one, Hatice Gökçe continued, "Bringing together different fields of design is a part of the experimental process for me. When we are designing fashion, we work with masters and craftsmen. Without them it would be impossible to create a product. This project is important as it brings together people who are on the crafts side to people who are on the design side. For a designer to lean the usage of the materials from the craftsmen directly, enriches the designs."

The project which started on Sept. 1 2015, enabled the artists, designers and craftsmen to work together and learn from each other's experiences while producing. The resulting products will be on display at the Istanbul Modern Store as of May 3, 2016. In the project the traditional production techniques of copper, wood, glass, bone and pearl were reinterpreted and transformed into design objects. A total of five artists/designers and four craftsmen participated in the project. Atilla Kuzu's copper, Hatice Gökçe's bone, Adnan Serbest's wood, Ekrem Yalçındağ's pearl and Seyhun Topuz's glass designs were brought to life with the final touches of craftsmen Fatma Ayran, Sezgin Yalçın, Gamze Araz Eskinazi and Battal Yakut (Beto Usta).

For the project a digital publication was prepared both in English and Turkish called "From Craft to Design." Talking about the design and production process and having the characteristics of a craft archive, "From Craft to Design" can be viewed online and downloaded. Along with text that talk about a craft oriented production and design relationship the digital publication also gives general information about materials used, interviews in which the artists and designers talk about their experiences and interviews and videos of the craftsmen.
Last Update: Jun 01, 2016 1:35 am
RELATED TOPICS