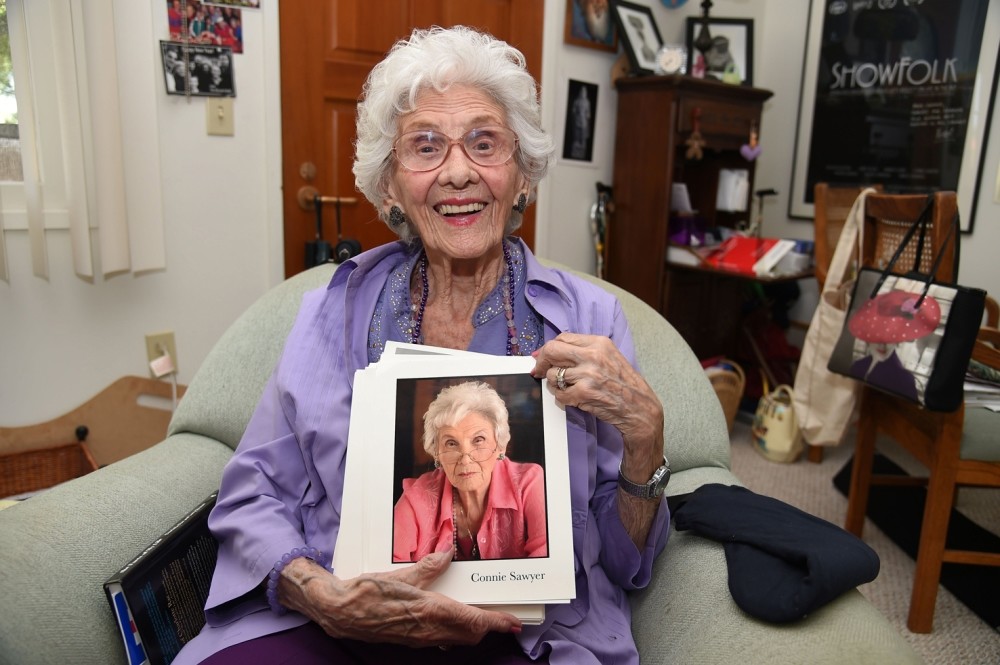 Working actress Connie Sawyer, 103, displays some of her headshots during an interview with AFP at her home in the retirement community of the Motion Picture Television Fund (MPTF).
by Jun 02, 2016 12:00 am
Johnny Weissmuller was said to walk the grounds of this retirement home letting out his trademark Tarzan yell. Another resident wistfully recalls missing out on a date with Marilyn Monroe, while a third has stories about "Walt" or "Frank" - that is Walt Disney or Frank Sinatra.

Hollywood's golden age may be long gone but it's still very much alive and kicking at this retirement community north of Los Angeles, where a who's who of the industry reside.

Here, you can meet a set director who worked on "Doctor Zhivago" or "Mutiny on the Bounty," a film researcher who worked on "Star Trek," "Chinatown" and "Fiddler on the Roof," or a 103-year old actress who knew Sinatra and recently auditioned for a horror flick. "The people here have done every kind of job you can imagine associated with film and television," said Bob Beitcher, president and CEO of the Motion Picture and Television Fund (MPTF), which runs the home located in Woodland Hills.

"You have everything from publicists, to animators to character actors to directors, writers, wardrobe, costume, hair and makeup." Founded in 1921 by cinema pioneers Charlie Chaplin, Douglas Fairbanks, D.W. Griffith and Mary Pickford, the MPTF's mission was initially focused on helping stars unable to make the transition from silent film to "talkies."

The charitable organization began with coin boxes that were placed at the studios, where actors could drop spare change to help industry professionals who often worked as freelancers and had no job protection. Nearly a century later, the MPTF continues to take care of its own through donations, albeit on a much bigger scale, with the likes of George Clooney, Kirk Douglas and Steven Spielberg lending their support.

"No other industry in the world has done something like this and this is what makes it so remarkable," Beitcher said. "People who work in the industry are like gypsies," he added. "They move from place to place, uproot their families to move to Louisiana, to New York or to Europe ... and many do physical labor on a film or TV set that is hard on them."

About half of the 165 residents at the retirement home pay for their room and board, which ranges from $3,400 to $6,100 a month, and the Fund pays for the other half unable to afford the cost.

Though a few of the retirees on the sprawling 40-acre campus are well-known in the industry, the majority are cast and crew members who spent their careers working quietly behind the scenes and never got on-screen billing.

Steven Kohler, 87, can make your head spin as he ticks off the names of some of the greats he rubbed shoulders with during his long career as a set dresser.

"Oh yeah, the crew would all sit together for lunch sometimes during filming," he said, recalling his time on the set of the 1965 epic drama "Doctor Zhivago," starring Omar Sharif and Julie Christie.

Marlon Brando, whom Kohler got to know during filming of the 1962 historical drama "Mutiny on the Bounty," was nothing more than a kind-hearted gentleman, he says.

"The bigger they were, the more friendly they were," said Kohler, sitting in his impeccably decorated cottage at the retirement home, where he moved nearly five years ago.

"Brando was very generous. He helped people without anybody knowing."

Fellow resident Robert Mirisch, 77, whose family ran the Mirisch Company, one of Hollywood's top independent production companies in the 1960s, for his part likes to recall his missed date with Marilyn Monroe. He had met Monroe during the filming of the romantic comedy "Some Like it Hot," produced by his family's company and ended up being invited to accompany the sultry star to the movie's premiere in New York. Only problem was that he had plans to visit his ailing father at the time and politely said 'no.' "So I'm the guy who turned down a date with Marilyn Monroe and my father had the gall to live numbers of years after that," jokes Mirisch, who was an entertainment industry attorney and who bears an uncanny resemblance to Bob Hope.

But living at the retirement home is not all about showbiz memories, playing poker or doing laps at the pool donated by Jodie Foster.

A number of the retirees put their creative talents to use at the community's in-house TV station where they produce original programming - including a comedy called "Law and Disorder," documentaries and game shows - that is mixed with Hollywood movies and sitcom reruns.

"Channel 22 proved creativity doesn't end when you are 65," Beitcher said. Some of the residents, such as 103-year-old Connie Sawyer, also still work professionally and are not ready to call it quits. Sawyer, whose filmography includes a role in "A Hole in the Head," starring Frank Sinatra, as well as dozens of other movies and television series, last year appeared in a Super Bowl commercial and just recently auditioned for a horror movie. "I'm still waiting to hear from them if I got the role," she says.
RELATED TOPICS