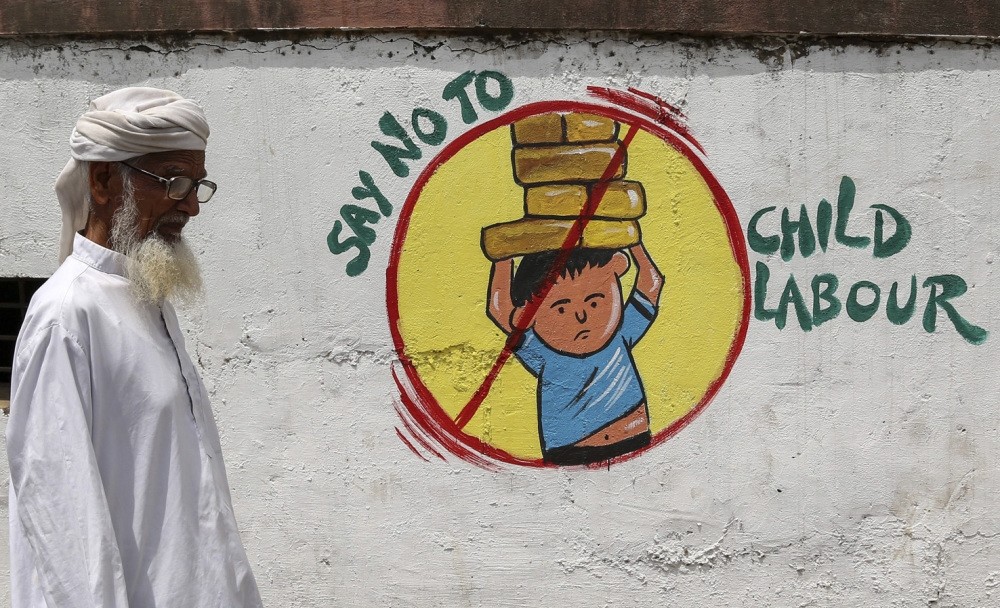 by Jun 15, 2016 12:00 am
Children from some poorer families in Pakistan go to work as domestic maids in upper-middle class homes where they often receive oppressive treatment.

Nazia Shaukat, a girl in her early teens from the eastern Pakistani city of Faisalabad, was forced to make a big decision early in life. She had to become a maid at a household in Lahore, a city hundreds of miles away from her hometown, to support six siblings after her father lost his job due to illness.

"I didn't want to do that but there was no other option," Shaukat said from a child protection office in Lahore, the capital of the Pakistani province of Punjab.

Shaukat's employer promised her a better life, good food, education and reasonable pay, but all these proved to be an illusion.

At the family's house in Lahore, Shaukat faced torture, abuse, malnourishment and harassment, while she was barred from making contact with her family.

"The wife of the employer and her two daughters used to beat me every day," she said, trying to hold back her tears. "I wanted to run away but didn't know where to go." Eight months of suffering ended when an electrician found out about her treatment and called the helpline of the Child Protection and Welfare Bureau.

The officers from the bureau raided the house, recovered Shaukat and arrested the woman. "Her arms had been broken several times and there was a scar on her neck," said Tania Malik, the program officer at the bureau, who was part of the team that rescued Shaukat.

Shaukat has lived at the bureau's hostel for a year now, recovering from the trauma, undergoing physical and mental rehab and learning to stitch clothes, something would help her to find work in the future.

Meanwhile, the bureau is prosecuting her former employer's wife to make sure she is punished, before reuniting Shaukat with her own family.

Malik said Shaukat's is not the only story in Pakistan of the abuse and torture of child maids - both male and female. The bureau, which was established in 2005, has recovered thousands of kids from domestic servitude in "inhumanely harsh conditions."

"Kids as young as 5 sometimes end up facing such abuse," said Malik.

Most of the cases in which parents from low-income families willingly send their children to work in upper-middle classes families are driven by abject poverty, said deputy Saba Sadiq, who heads the bureau.

On paper, in Pakistan it is mandatory for children to attend school until the age of 15.

According to official statistics, a third of Pakistan's estimated population of 180 million lives beneath the poverty line, with the desperation this breeds considered to be the heart of many social ills. Fatima Nasir at the Sparc charity, which works for the welfare of kids in the capital Islamabad, seconds Sadiq.

"It is hard to break this cycle," said Nasir. "For middle-class families, it is a status symbol to have a maid ... and for poor parents and kids, it is hope for a better life, good food."

Lack of education and a rapidly increasing population are the other factors to which Sadiq attributed the rising trend of people sending their kids to work as maids, despite the risk of abuse.

There are no authentic figures available on how many children are trapped in abusive working conditions, but Nasir said the trend was definitely going up. According to a survey conducted by the International Labor Organization (ILO) in 2004, around 246,000 children were engaged in the domestic help sector in Pakistan.

The problem of working children is marked on International Child Labor Day on June 12.

"This is a gross human rights violation," said Nasir. "Many kids face torture, violence and sexual abuse." Overlapping laws, and a prosecution system riddled with corruption which always favors the wealthy elite instead of the poor, are reasons that justice is denied to most victims, said Rizwan Khan, a lawyer based in Islamabad. "Unless the state becomes a party in child cruelty cases, we can't expect poor parents to go through the painstaking process of prosecution," said Khan.

Just one institute in one province would not save millions of children, the lawyer added, pointing to small efforts being made in other regions.

At the bureau in Lahore, Shaukat's recovery seems on track with Malik and psychologists trying to help her get over the trauma. But she wants to see her former employer punished. "I want what that what she did to me to happen to her," said Shaukat.

And the lawyer Khan argued that until the state shows a strong resolve against abusers, children like Shaukat will continue to suffer.
RELATED TOPICS