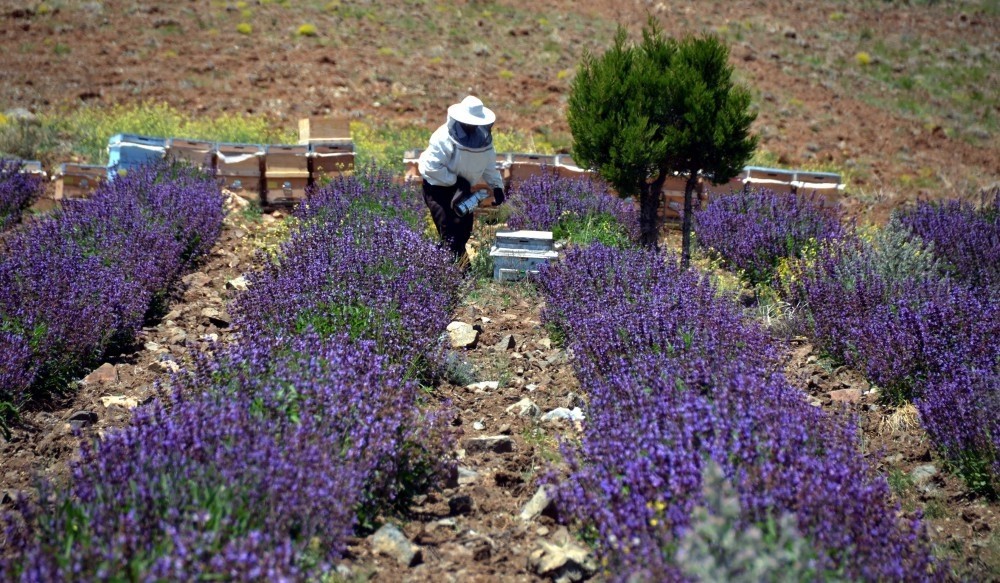 The Lisinia Natural Life Area, which was first estblished in the city of Burdur to fight drought with less water use, is on display at Expo Antalya. All materials in the project are recyclable and made of natural products

Lisinia, one of the best gardens at Expo 2016, which is being hosted for the first time in the coastal city of Antalya, is a garden established by a group of village women. The Lisinia Natural Life Area in Burdur has been set up on an area of 1,400 square meters at the expo venue. The team, including members such as Öztürk Sarıca, the founder, and various village women who have been actively involved in various projects including the Lavender Stream, built Lisinia at Expo 2016.

The team first collected juniper wood, which is normally used in deserted or rundown houses, in their village. Using this material, Sarıca said they have built seven towers. Under the coordination of Özgül Özçelik, the towers have been decorated in line with Ottoman-era architecture, the tents of the nomadic Turkic communities, Native American tents, the Egyptian pyramids and roof systems in northern Europe. Sarıca also said these trees, usually used for building two to three village houses, have a culture dating back 500 to 600 years.

He also noted that Lisinia is very much in line with the theme and spirit of Expo 2016 and has been involved in various projects such as anti-cancer agricultural production, the production of aromatic herbs such as lavender, sage and thyme, which require very little water and is therefore crucial for the protection of the Burdur and Salda lakes, wildlife rehabilitation and protection, a nature school and nature training provided to its volunteers. Underlining the importance of the project for the protection of Burdur Lake, he said: "Water is crucial for human life. Therefore, we have transferred our aromatic herb project here under the scope of protection of the wetlands around the Burdur Lake project," Sarıca said.

All materials set up for the project are recyclable and made of natural products. The team has created miniature versions of Burdur Lake, Salda Lake and Acıgöl (Çorak) in the expo area. Sarıca said the Lavender stream in Akçaköy is also present. "Çorak Lake has started retaining water since the Lavender Stream was set up. With the Lavender Stream set up at the fountain head of the water resources in the region, youngsters from the surrounding villages started the production of aromatic plants, mainly lavender. Cattle farming, which is one of the main reasons behind the diminishing water sources, is no longer performed in this village," Sarıca said, and added that even though the rainfall levels were not high, Çorak has turned into a heaven for flamingos and "şalba," a type of a sage growing on the hills that has been cultivated for the first time this year.

A total of 500 lavender plants were planted in the area that resembles the original Lavender stream, and Sarıca noted that they have brought the best lavender that they planted in the Lisinia cultivation area four years ago to the Expo. "Within a month or two there will be a purple riot of color here. From now on, people do not have to travel to France to take photos. The magnificent view of lavender plants will also be experienced here. The soil structure was not suitable here. There is debris from rocks remaining after chromium is extracted from the area, which we use as a filling material. Women from different villages who have worked while setting up the Lisinia and Lavender streams, are also working here. We completed the area within two weeks," Sarıca said, adding that the plants will flower this year.

A renowned artist from Burdur, Durul Bakan, participated in Lisinia's Expo project by producing an eagle statue made out of waste juniper trees. Sarıca noted that after the juniper tree project, their next focus will be a goat project. "We believe that mountains should be opened to goats, who are their real owners. Therefore, we created a goat statue to symbolize fighting against forest fires; so that Turks' need for meat can be covered by Turkish goats," Sarıca noted. He also added that there are two human statues which symbolize that humans' time has come to an end; that point when they have consumed all the water or nature through the use of dangerous chemicals has been depicted by the two statues.

Running since April 23, Turkey is currently hosting the international EXPO 2016 Antalya with the theme "Flowers and Children," which will continue until Oct. 30. The exposition has been set up in a big field, including an EXPO tower symbolizing Hadrian's Gate, Turkey's first Agriculture and Biodiversity museum, a congress center, two amphitheaters and an artificial island for children.
RELATED TOPICS