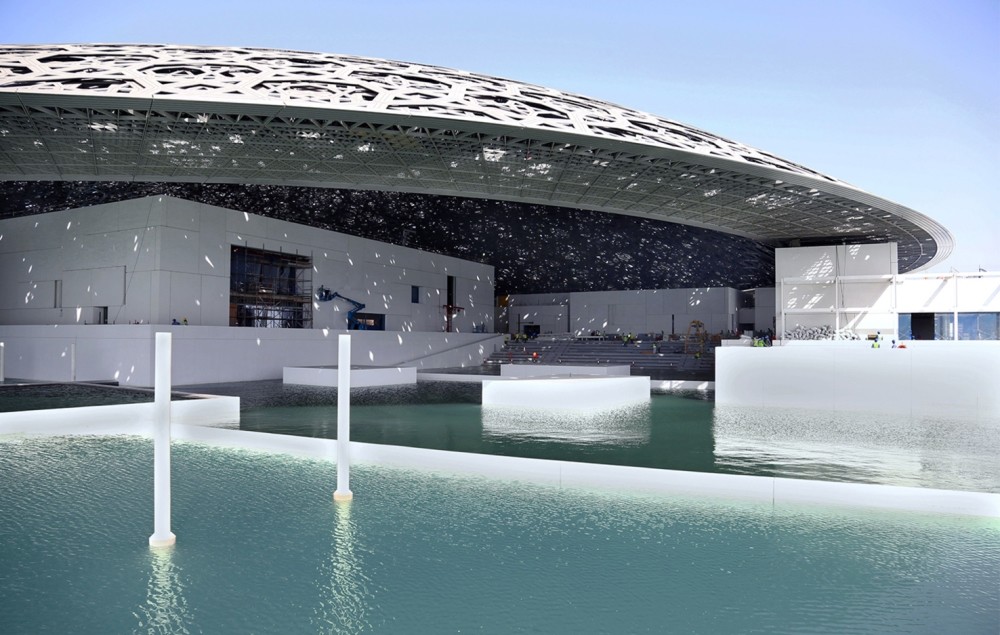 A water system, derived from ancient Arabian engineering, will flow between the enclosed galleries and outer areas of the museum.
by Jun 17, 2016 12:00 am
Abu Dhabi's Louvre museum has been surrounded by sea water in a major step towards completion of the ambitious project, the developer said Tuesday.

"This delicate process is the result of months of planning and preparation to ensure that the inflow of sea water takes place in a controlled manner around and within strategic places in the museum," said TDIC chairman Ali Majed al-Mansoori.

Designed by French architect Jean Nouvel and built at a cost of half a billion euros, the Louvre Abu Dhabi will feature 9,200 square meters of gallery space. A temporary platform was built in the sea in 2009 for the museum's construction, during which more than 4,000 steel and reinforced concrete piles were driven into the ground to create a base.

The outer layer of the museum's giant 180-meter dome, which extends out over the water, was completed in September. The iconic structure is perforated with designs that will project light patterns in the shape of palm trees onto the exhibition space below. A water system, derived from ancient Arabian engineering, will flow between the enclosed galleries and outer areas of the museum.TDIC has not yet announced a date for the opening. Many of France's grand museums, including the Louvre, the Musee d'Orsay and the Palace of Versailles, will loan art to Abu Dhabi as part of a 30-year collaboration

with the emirate worth one billion euros. Louvre Abu Dhabi will be the first museum to open at the Saadiyat Cultural District and will be followed by the Zayed National Museum and Guggenheim Abu Dhabi.
RELATED TOPICS