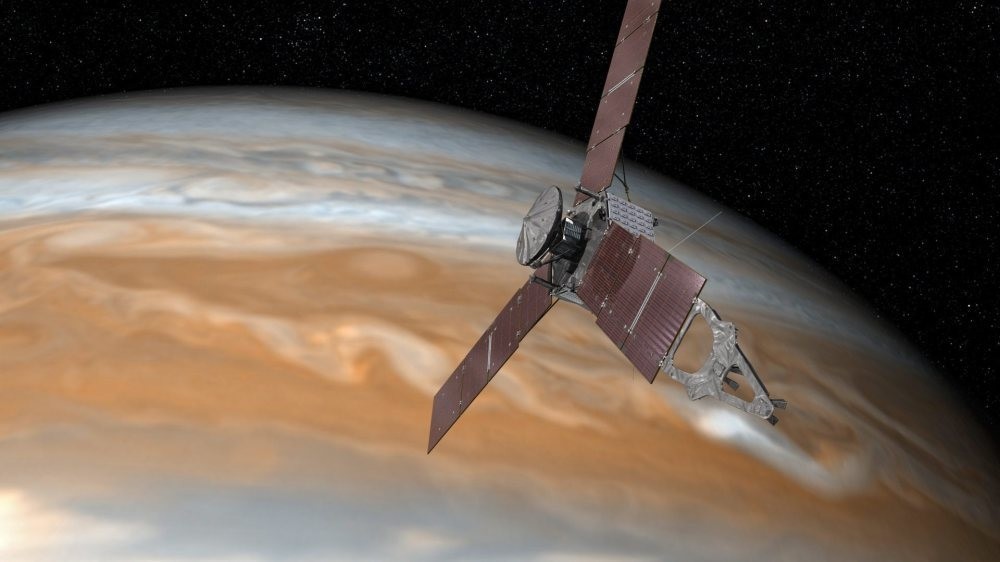 by Anadolu Agency Jun 20, 2016 12:00 am
NASA has announced that Juno, a spacecraft the size of a basketball court, would come within 4,667 kilometers of the gaseous clouds that envelop Jupiter on July 4. Once it reaches Jupiter, Juno will dart under the toxic clouds and collect important data about the planet's chemical makeup, origin and structure.

NASA announced that the spacecraft is 13.8 million kilometers from Jupiter, categorized as a "gas giant" by astronomers and famously the largest planet in the solar system.

Even though humans have been aware of Jupiter for millennia, the massive realm is still very mysterious. Jupiter is positioned next to Mars, but is much further than the sun is from Earth. NASA is hoping Juno's rendezvous with Jupiter will yield data similar in importance to the information gathered last year when the New Horizons craft reached Pluto.

"At this time last year our New Horizons spacecraft was closing in for humanity's first close views of Pluto," Diane Brown, Juno program executive, said in a statement. "Now, Juno is poised to go closer to Jupiter than any spacecraft ever before to unlock the mysteries of what lies within."

Juno will get closer to Jupiter than any previous spacecraft. NASA first visited Jupiter in the 1970s and its Galileo spacecraft orbited the planet from 1995 to 2003, when NASA officials crashed it into Jupiter's surface. Juno will actually get much closer than Galileo and will zip around the planet 37 times in the next 20 months.

First, however, the team controlling Juno will have to safely insert the spacecraft into orbit around Jupiter, a harrowing task that will take 35 minutes. Even if Juno survives the insertion, it will have to deal with whirlwinds of noxious clouds that swirl across Jupiter's atmosphere.

"We are not looking for trouble, we are looking for data," explained Scott Bolton, principal investigator of Juno, in a statement. "Problem is, at Jupiter, looking for the kind of data Juno is looking for, you have to go in the kind of neighborhoods where you could find trouble pretty quick."
Last Update: Jun 20, 2016 1:10 am
RELATED TOPICS