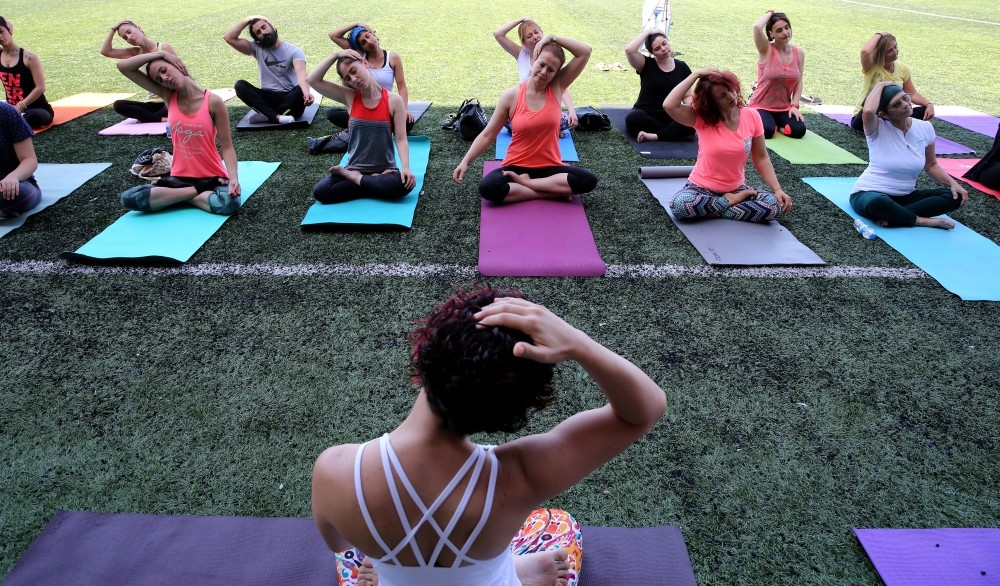 by Daily Sabah with Wires Jun 22, 2016 12:00 am
Indian Prime Minister Narendra Modi called yoga a "people's mass movement" as he took to the mat on Tuesday, along with millions of others worldwide, to celebrate the ancient practice. Across India, sailors, soldiers, schoolchildren and bureaucrats, bent and twisted their bodies from early morning at mass outdoor sessions to mark the second International Yoga Day.

Sessions were held around the world, including at the Sydney Opera House where colorful mats were spread outside the Australian landmark, while Afghans and foreigners gathered at the Indian embassy in Kabul. The yoga-loving Modi, dressed in a white tracksuit, led more than 30,000 people in the northern city of Chandigarh in a mass session, where they performed poses and breathing exercises at the outdoor Capitol Complex.

"Do not wait, make yoga a part of your life," Modi urged in a brief speech to mark the event, an idea he successfully asked the United Nations to adopt. "This is a day linked with good health and now it has become a people's mass movement," the 65-year-old premier added. Modi took a short break to inspect the poses of his fellow yogis, who included students and soldiers, before returning to his spot.

In Turkey, International Yoga Day was marked by different events. In Istanbul's Bakırköy Botanik Park, a yoga session was held with Indian yoga instructor Rishi Romeo Nath at the initiative of the Indian General Consulate in Istanbul. Participants performed breathing and laughing exercises and meditation. Children also joined yoga sessions. Stressing the health benefits of yoga, Nath said that yoga may help people with fasting, as in India they also observe fasting on certain days. "Fasting is also seen in Indian culture. It is a detoxification process that purifies the body and yoga helps us to control our thirst and hunger as well as energy." The consulate also organized yoga events with Istanbul Yoga Center at Kalamış Park in Kadıköy. A large group of people also headed in the evening to Istanbul Technical University's (İTÜ) Taşkışla Campus for another yoga session held by the Adnan Çabuk Siddashram Yoga Foundation.

Indian scholars believe yoga dates back 5,000 years, based on the archaeological evidence of yoga poses found inscribed on ancient temple stones, and references to Yogic teachings in the Vedas, the ancient Hindu scriptures. Modi has established a government ministry charged with promoting yoga, and last year led around 35,000 people in New Delhi in an outdoor session to mark the first International Yoga Day.
RELATED TOPICS