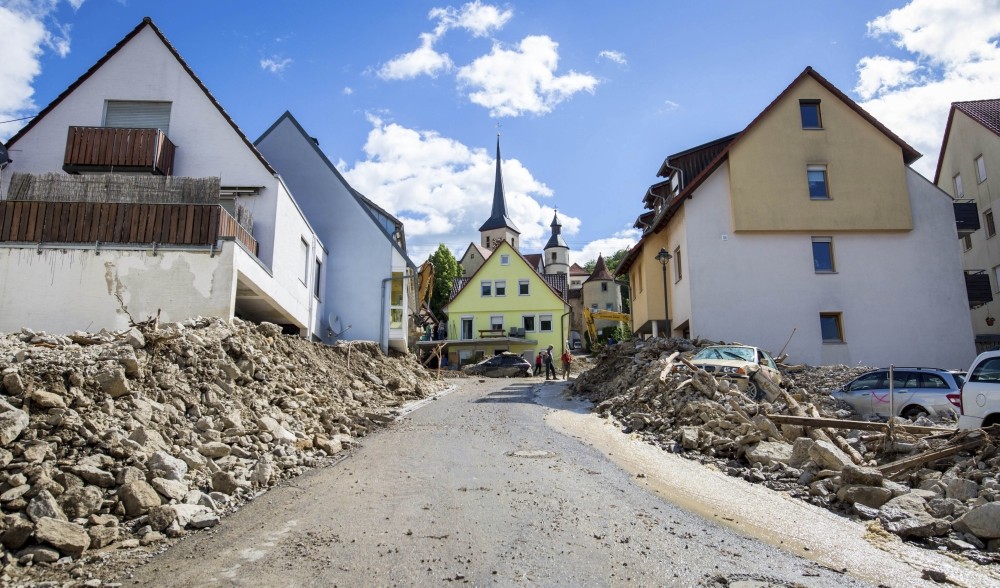 The village is empty except for a few people working to get things back to normal: A man uses a shovel to scratch the dried sludge off his farm, while his neighbor fixes a hole in the wall of his house.

Most houses are uninhabitable, and the words "No Trespassing" are written next to front doors in red spray paint. "This is a ghost town at the moment," says Mayor Frank Harsch.

One month ago, a flood hit the community of 900, washing up rubble, tree trunks and boulders that busted into the sides of homes. Harsch says at least 50,000 tonnes of debris have been transported out of the village and eight houses were demolished. Even the sewage systems, water supply and power lines had to be rebuilt.

Those affected are packing, cleaning - anything to reach normalcy as quickly as possible. But the amount of damage and the cost of reparations are taking their toll on the village. Thomas Hopf, who owns a hotel in Braunsbach, finds his mood varies. He built the hotel three years ago with his partner Heike Philipp, who took it over from her parents. They used it to set up their own livelihood.

"Now it's like starting over from scratch," he said. There is nothing left of the old furniture and atmosphere. Hopf stands staring at the empty concrete floor.

Giving up isn't an option. "I don't think about it for a single minute," he says. The business was well insured and he wants to be entertaining guests again by next spring. He is determined: "We'll make it happen." Hugo Lechner, 69, also has a timeline in mind for getting his farm up and running.

"I want to put up the Christmas tree here again," he says pointing to his house that was buried in rubble up to the first floor. For the time being, Lechner is living with his family in a recently abandoned house loaned to him by acquaintances. According to the municipality, most flood victims have found places to stay through personal contacts.

Heavy rains like those last weekend make the people of Braunsbach uneasy, despite immediate action taken by the municipality to mitigate the risk of flooding.

The mayor insists that certain plateaus, where water flows downhill towards the village, be flattened. Hopf, the mayor and other villagers can only hope that they will never see a flood of this magnitude hit Braunsbach again in their lifetime.
RELATED TOPICS