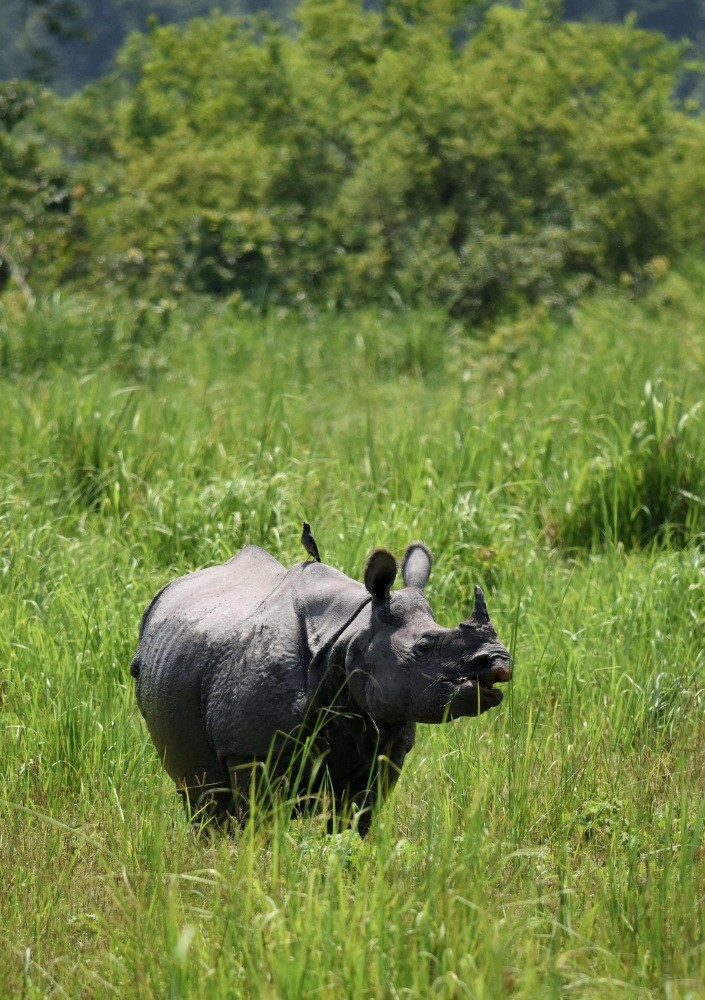 by Jul 13, 2016 12:00 am
As night falls over the lush plains of India's Kaziranga National Park, a small group of lightly armed forest guards sets out on foot to protect the world's largest population of one-horned rhinos.

These men with their ageing rifles and small plastic torches are on the front lines of a battle against the increasingly sophisticated international poaching networks that prey on endangered species, entering the park under the cover of darkness to kill them for their horns.

A decade ago, India had all but declared victory over poaching in Kaziranga, a 430-square-kilometer protected area of forest in the northeastern state of Assam that is home to around 2,500 rhinos.

But recent years have seen an alarming upsurge in the slaughter of the animals, whose horn is highly prized in neighboring China and in Vietnam.

At least a dozen rhinos have been poached in Kaziranga in the first six months of this year, more than twice the number killed in 2006.

"The value of a horn has shot up like anything, that is why people are ready to risk their lives," he added.

Park rangers say they are woefully under-equipped to deal with the modern, sophisticated weapons used by the poachers, including AK-47s and night-vision goggles.

Many of the myriad insurgent groups operating in India's restive northeast are involved in the trade, which passes through the neighboring state of Nagaland into Myanmar before being smuggled to China.

The issue is hugely emotive in Assam, where the rhino is both a source of pride and a big tourist draw. The problem made global headlines in April when a rhino was poached on the very day that Britain's Prince William and his wife Kate visited the national park.

"Many years ago you would see rhinos everywhere around here," said local villager Damayanti Chhetri. "The poachers have no heart."

But some are also being paid off by poachers, who rely on their knowledge of the local terrain, according to one senior forest official.

"Locals know every corner of the park. Huge money is involved. It is a risky job, and still they do it," said the official.

The risks are high: Kaziranga's forest guards have the right to shoot suspected poachers on sight, and dozens have been killed over the last decade.

The policy is controversial, but they argue it is justified as no one is allowed to enter the park without permission.

"If we see someone, without any enquiry we can shoot. We will presume that he is a poacher," said one guard who killed a suspected poacher.

Two years ago Dipen Sawra, a 35-year-old father of two, failed to return home after a forest guard offered him work cutting firewood. He was later found dead with a bullet wound to the head.

"They were good friends, he [the guard] used to come and drink tea with us here," his father Vikari Sawra told AFP at the family's small mud and straw home.

"We never thought something like this would happen," he said. The family says they never received a death certificate or the results of the autopsy. The guard was arrested on a murder charge but was later released and his case is still pending. "I'm old, I can't work, and I have no money for lawyers," said Vikari Sawra. "I lost my most precious thing and I have no money to fight a case."
RELATED TOPICS