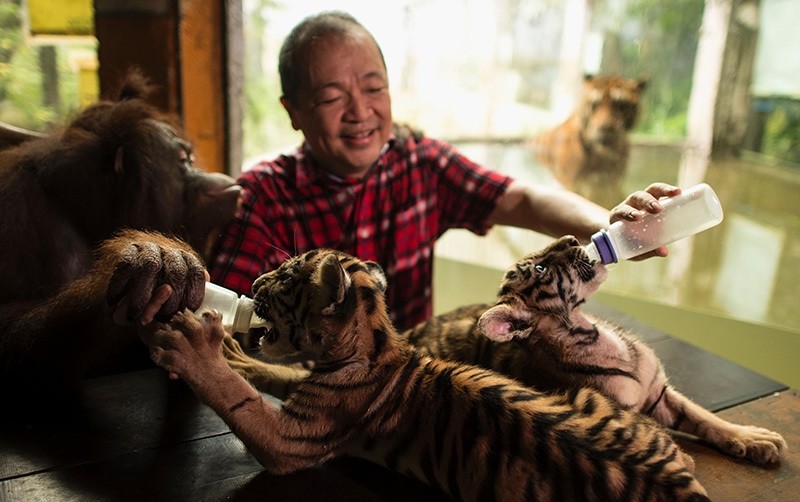 A pair of newborn Bengali tigers and a thirsty orangutan charmed Filipino zoo visitors Thursday, as the captive-bred cubs playfully competed with the poney-tailed ape for a milk bottle.

The two-month old tigers, named Duterte and Leni after the country's president and his deputy, were joined by the orangutan during snack time at a private zoo in Manila.

The ape, with a chute of hair jutting up from the top of its head, proved more interested in the milk than the young cubs, snatching a bottle away from the siblings who appeared not to notice.

At one point though, the orangutan -- called Pacquiao after famed Filipino boxer Manny -- concedes and feeds one of the tigers from the bottle.

Despite their cuddly appearance, zoo owner and businessman Manny Tangco warned visitors to keep their distance.

"Don't get too close, they can already scratch you," he told visitors.

But Tangco assured the 18-year-old orangutan was happy to play with the tigers.

"They are all friendly with each other," he told AFP.

The two-month old cubs are the latest born at the private zoo, bringing to 12 the number of tigers born at the facility.

The tigers are the descendants of a pair of captive-bred tigers donated by an American breeder 35 years ago, according to Tangco.

In a political nod, the cats are named after newly-elected President Rodrigo Duterte and Vice-President Leni Robredo.

The Bengal tiger is listed as endangered by the International Union for Conservation of Nature and Natural Resources. Tigers are not indigenous to the Philippines.