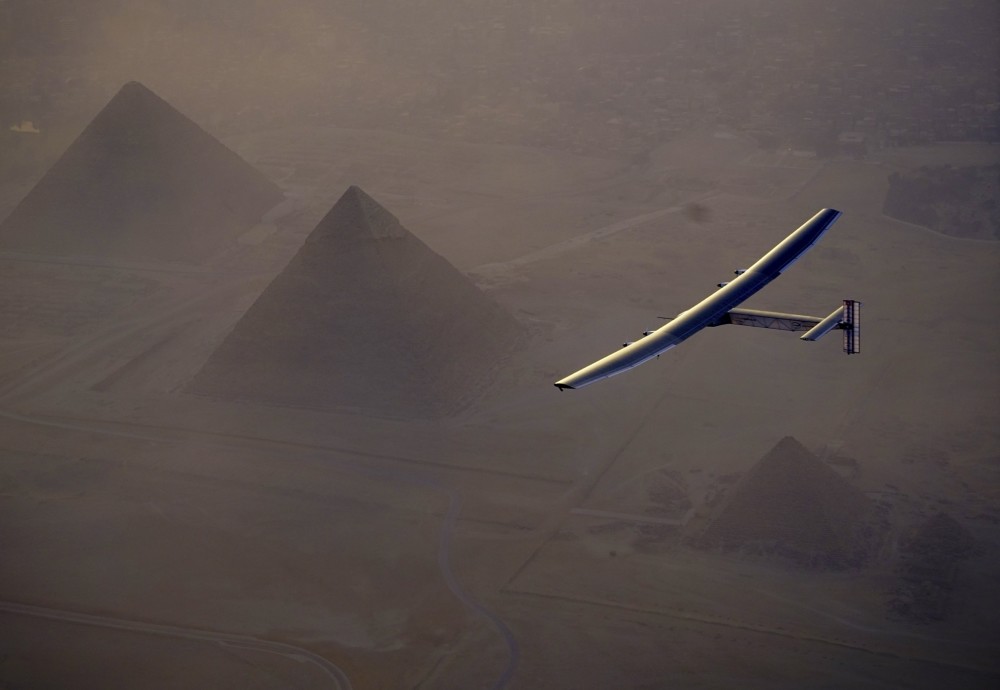 by Jul 14, 2016 12:00 am
The Solar Impulse 2 landed in Cairo on Wednesday for the penultimate stop in the solar-powered plane's world tour, two days after setting off from Spain.

The experimental plane had completed the first solo transatlantic flight powered only by sunlight to land in Spain last month, and will continue from Cairo to Abu Dhabi, where it began its marathon journey in March last year.

After setting off from Seville on Monday morning, the plane passed through Algerian, Tunisian, Italian and Greek airspace, and flew over the Giza Pyramids before touching down at Cairo airport at around 7:10 a.m. (05:10 GMT).

Its support crew cheered as the plane, no heavier than a car but with the wingspan of a Boeing 747, landed, and trailed after it on bicycles.

"It was fantastic, everything worked well," pilot Andre Borschberg told the control tower, as a live stream on Solar Impulse 2's Facebook page was broadcast from the cockpit.

He emerged from the cockpit and hugged Bertrand Piccard, with whom he has taken turns flying the plane around the world.

Solar Impulse is being flown on its 35,400-kilometer trip around the world in stages, with Piccard and his Swiss compatriot Borschberg alternating at the controls of the single-seat plane.

Picard, who had arrived early to greet the plane, told reporters that flying Solar Impulse 2 was "magic."

"I love to fly this plane because when you are in the air for several days you have the impression of being in a science fiction film," he said.

"You look at the sun, you look at your motors, they turn for days and for days, no fuel. And you think that's a miracle. That's magic. It is actually the reality of today. This is what we can do with these new technologies."

He said the pilot takes 20-minute naps during the long flights, as the plane inches across the sky at about 48 kilometers an hour.

It had completed its flight from New York to Seville in 71 hours, flying through the night with the energy stored in its 17,000 photovoltaic cells.

Borschberg and Piccard have said they want to raise awareness of renewable energy sources and technologies with their project.

Picard said a back-up team of engineers and meteorologists provided guidance to the pilot and had enabled him to pass through clouds as if "through the eye of a needle" when he was at the controls.
RELATED TOPICS