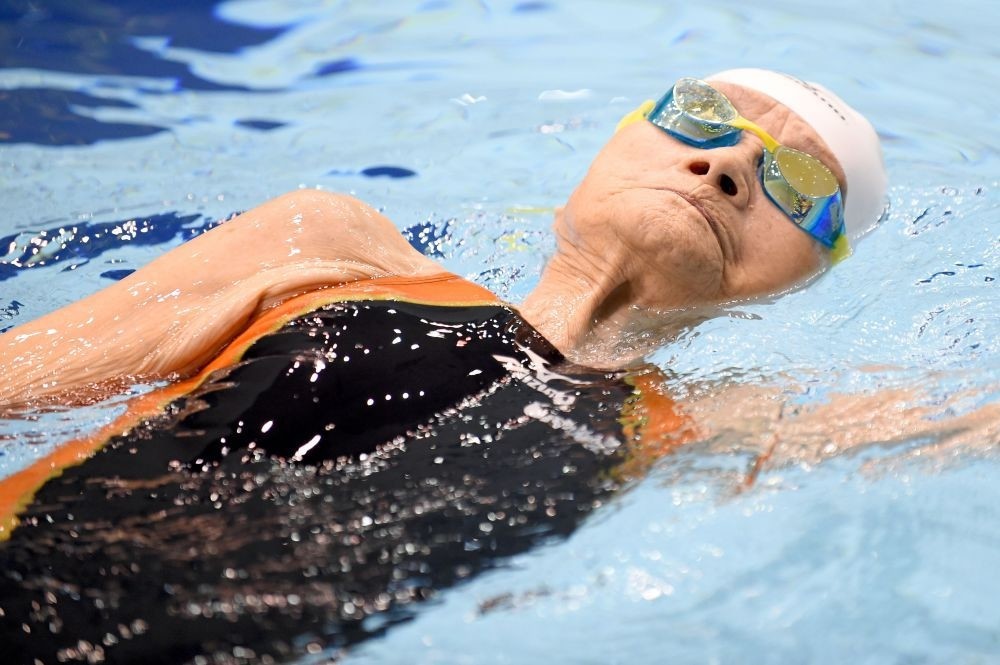 by Jul 18, 2016 12:00 am
As the world's top swimmers prepare for the Rio Olympics, a sprightly Japanese centenarian insists she will still be smashing records by the time the 2020 Tokyo Games roll around.

Closing in on her 102nd birthday, Mieko Nagaoka has racked up a slew of jaw-dropping world bests in her age bracket after only taking up swimming in her late eighties, but warns she is not done yet. "I'm fit as a fiddle," Nagaoka told Agence France-Presse (AFP) in an interview after completing the 400-meter freestyle in 26 minutes, 16.81 seconds at a Japan Masters Swimming Association competition in Chiba, on the outskirts of Tokyo.

"The secret is to eat well and stay active. It's no good sitting around at my age. I want to keep swimming until I'm 105 - and beyond that," added the Yamaguchi native, who has lived through 22 Olympics to date. Nagaoka, who swam the backstroke sporting a white cap and dashing black and gold swimsuit, finished well over 17 minutes behind the winner, 80-year-old Etsuko Azumi.

Hard of hearing, Nagaoka failed to hear the roar of the crowd after completing the eight-lap race and attempted to return for a ninth before being fished out by judges as nervous medics watched on.

"It was just another race," Nagaokasaid smiling after changing into a pink jacket and matching hat.

"Swimming makes me happy, that's what I love about it," she added. "When I'm swimming I'm in my own little world." Along with 105-year-old sprinter Hidekichi Miyazaki, another geriatric record breaker, Nagaoka is blazing a trail for Japan's turbo-charged pensioners in a country with one of the world's highest life expectancies.

Nonetheless, Nagaoka's time was well outside her world record of 16:36.80 set two years ago. Her rivals had long dried off and were talking by the side of the pool when Nagaoka finally touched to thunderous applause. But she struck a defiant tone.

"I want to keep swimming as fast as I can," said Nagaoka, who owns world records in the women's 100-104 age division in nine events, including the 1,500-meter freestyle - a distance most people of her venerable age would struggle to walk. "I'll keep going for as long as I'm alive."

Born in 1914, days after the outbreak of World War I, when Japan fought on the side of the allies, Nagaoka's rambunctious lust for life continues to astound her family and coaches. "Her attitude to life is totally scandalous," son Hiroyuki, 76, said. "She refuses to live life by the correct rules. She eats only the finest food and turns her nose up at anything she doesn't fancy. "You're supposed to slow down with age, but she was getting quicker with age in her nineties, breaking record after record," he added. "That sense of joy and purpose in life is the secret to her long life."

Nagaoka still trains three times a week in Yamaguchi, southwest Japan, under the tutelage of long-time coach Shintaro Sawada. "At first I thought she was joking about swimming until 100, but she was deadly serious," said 41-year-old Sawada. "I've never met anyone like her - she eats when she wants and sleeps when she wants. She has a very stubborn streak and fierce determination."Perched beside his mother, the younger Nagaoka beamed with pride. "She's amazing," said Hiroyuki. "Mentally she's still very sharp. She's the world's greatest mom!"
Last Update: Jul 18, 2016 3:17 am
RELATED TOPICS