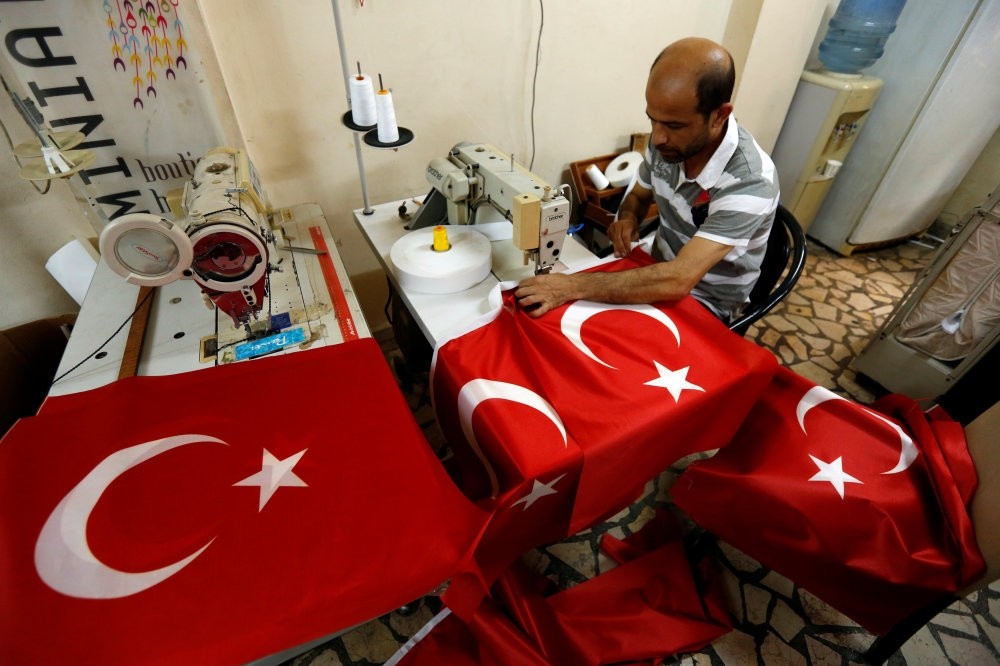 by Daily Sabah with Reuters Jul 22, 2016 12:00 am
Military coups are rarely good for business, but at least one small sector of Turkey's economy has seen roaring trade since the failed coup on July 15 - the nation's flag mongers.

Flag manufacturers are working flat out to meet surging demand from patriotic Turks after a faction in the armed forces tried to topple the government on Friday evening.

"From the first day around 1.5 million flags were sold. I expect another 5 million to be sold in the coming days," said Orkun Altıer, the owner of flag producer Gözde Bayrak.

"Teachers, blacksmiths, canteen operators, everyone wants flags at the moment. I don't even have one left for myself to hang in my own home," he said.

Manufacturers say they expect up to 10 million flags to be sold in the coming days in Turkey, which has a total population of nearly 80 million people. They say this would mark the highest demand since Turkey's football team made the semi-finals in the 2002 World Cup.Even in calmer times the Turkish flag - a white star and crescent moon against a red background representing the blood of soldiers killed in the War of Independence - is venerated in this proudly nationalistic country. It is a crime to damage or tear the flag or show it any disrespect.

"We had quite a lot in stock, but they have all gone. We have started up new production. ... Demand is huge. Our public is really so sensitive about this subject," said Selahattin Afşar of Karanfil Bayrak, a flag maker in the western city of Bursa.

"Personally, I was so sad for my country on the night of the coup attempt that I couldn't think of selling flags even though I had so many of them then."The flag can be seen flying from even more buildings and vehicles than usual since the attempted coup. Flags sell for as little as TL 3 ($1) in Turkey.

"We have increased production, but it takes time to make them," said İzzet Adar, owner of Aybayrak, who has been making flags for the past 25 years. "They are factory-made so it takes two to three days to produce them. "Basically everyone in Turkey wants flags."

On July 15, a small military junta linked to the Gülenist Terror Organization (FETÖ) attempted to topple the democratically elected government in Turkey and bring martial law. The attempt was prevented by military troops loyal to the government along with police and millions of citizens. More than 240 people, mostly civilians, were killed by coup soldiers and over 1,500 were injured. Turkey's opposition parties have united against the coup attempt, condemning it in the harshest terms and underscoring their determination to preserve democracy and rule of law in Turkey.
RELATED TOPICS