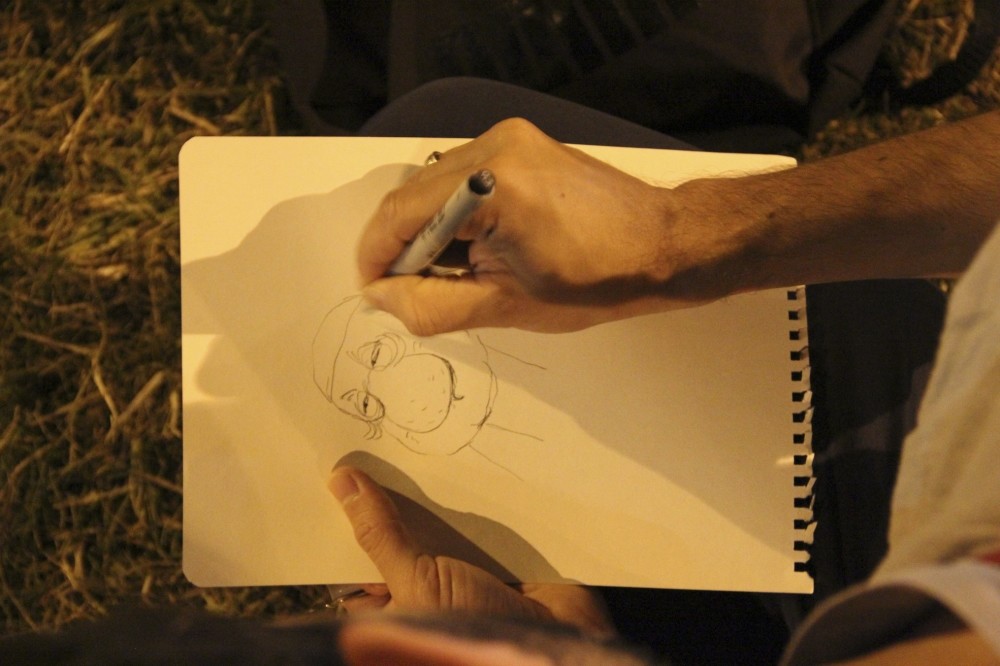 The caricaturists of Hacamat, a recently-closed Turkish cartoon magazine, are preparing to publish a series of caricatures that will be published CF Magazine during their democracy watches.
by Anadolu Agency Jul 25, 2016 12:00 am

Humor is often the best way to criticize, even in the darkest hours. The caricaturists of former humor magazine Hacamat criticize the FETÖ and the failed coup attempt as the best way they can with caricatures mocking the perpetrators

The caricaturists of Hacamat, a recently-closed Turkish cartoon magazine, are preparing to publish a series of caricatures during their democracy watch, standing in front of Istanbul Police Department to show opposition to the failed attempted coup, orchestrated by the Gülenist Terror Organization (FETÖ).

Speaking to Anadolu Agency (AA), the editor-in-chief of CF Magazine, Yusuf Kot said that although Hacamat was closed almost three months ago, they decided to publish a series of comics to criticize the attempted coup that began on July 15.

Saying that they have participated in the democracy watches taking place all over the Turkey since the attempted coup, Kot said, "We believe that we are serving our country and principles. We are obliged to wait here during the night as it is the command of our chief commander [President Recep Tayyip Erdoğan Erdoğan]. What we are doing here is watching out for our country. We cannot leave our post during a democracy watch." Kot claimed that they will stand with the people of Turkey, and stressed that they are preparing the magazine in the public squares since the public are standing in these squares all night for democracy watch.

"While we were publishing Hacamat, our motivation was seeing a lack of comic language to tell our perspective, as our country was going through critical times. We tried to discharge this responsibility as long as we could until our funding dried up. The characters 'Wizard Fethullah and his zombie gang' were evident back then and we drew upon this to fight back in Hacamat as well."

Caricaturist Faruk Gunindi said that their team at Hacamat had criticized FETÖ's treason long before the failed coup attempt, adding, "We criticized the organization even before the Dec. 17 and Dec. 25 operations. We harshly condemned the treason committed by Fethullah Gülen, the FETÖ ringleader, both in Hacamat and Cafcaf Magazine. I can say that if the attempted coup had been successful, we would be destroyed. So if they tell us to wait in these squares for a year, we have no choice but to obey."

Stating that once he had made sure his family was in a secure place, he ran to stand against the coup attempt, Gunindi said, "This coup attempt was so cruel that no one but FETÖ members could have orchestrated it. Yet the attempt blew up in their faces. People of Turkey are bound together more than ever. Currently the Turkish nation shares a common goal and feeling of love for our country. In fact, we want to share our thoughts and beliefs with caricature. Comedy can make things return to normal during dark times such as these."

Caricaturist Emre Bilgiç said that the Turkish nation had rewritten history on July 15 and continued, "I saw the photographs of FETÖ members who orchestrated the failed coup attempt being arrested by the police, after we repelled the coup attempt. I told myself that they were caught like 'Pokemons.' Then I drew them getting caught like Pokemons in the popular mobile game 'Pokemon Go' and sent it to everybody. We decided to draw again, since we realize than we can make fun of these things."

Stating that they are compiling what has happened since the coup attempt with a series of caricatures, Bilgiç said criticizing and making fun of the things that are uncomfortable is a very unusual job. "Things got very weird. We are not at our homes or offices anymore, but we are on a democracy watch. We are trying to draw and publish a humor magazine in the middle of Vatan Avenue, in front of the Istanbul Police Department, which saw fierce clashes on the night of the coup attempt. We are preparing two special pages for the August issue of CF magazine. We have compiled things that caught our attention since July 15. We know that two pages are not such a big deal, but consider this as a small salute to this huge victory."
Last Update: Jul 25, 2016 1:36 am
RELATED TOPICS