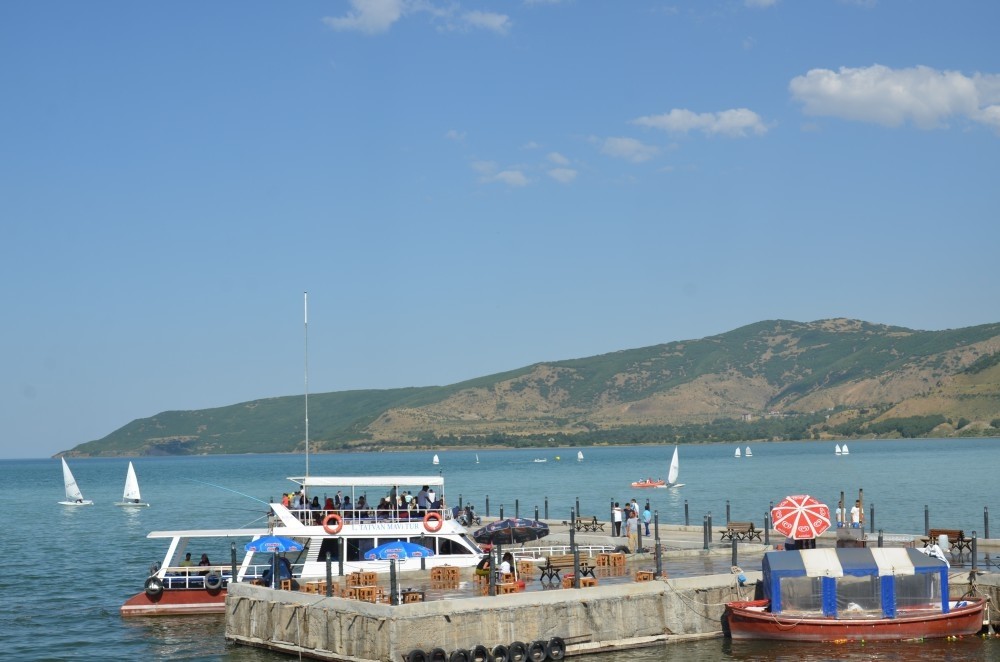 In Turkey's Eastern Anatolia region, it is popular for locals to head to Lake Van, the country's largest lake, during the hot summer days to refresh themselves. Not only local residents, but foreign tourists, mostly Iranians, also prefer the area as a vacation spot.

Ayanis Beach on Lake Van has recently received "Blue Flag" status, an eco-certification for beaches and marinas by the Foundation for Environmental Education (FEE) given after they comply with a number of standards including water quality, environmental education and information, environmental management and safety. The beach, which is 35 kilometers from the city center, will be better promoted to fully introduce it to the tourism industry, as part of a project by Turkey's Environment Education Foundation (TÜRÇEV) and the Tuşba Municipality.

Tuşba Mayor Fevzi Özgökçe said the project would take a year, adding that the Blue Flag certification is an important stage. The municipality is now working to develop the beach, extending it to 200 meters. "The next necessary thing is transportation. Tourists should be able to reach here easily," he said. New accommodation facilities measuring up to European standards will also be established to attract more tourists, especially Iranians, who comprise a large part of the tourists in the area. "The municipal works continue to finalize the project as fast as possible and create a big enough area for swimming and sunbathing," Özgökçe went on to say, adding that they aim to get Blue Flag status for other beaches around the lake. "The Blue Flag status indeed raises awareness of environmental protection. It is a priority to preserve clean areas," he declared. Other beaches surrounding the lake include the Bozkırlar Beach and Kız Taşı Beach, which are both clean and suitable for swimming.

Cevdet Özgökçe, the Regional President of Turkey's Association for Travel Agencies for Eastern Anatolia (TÜRSAB), said the Blue Flag certification will develop tourism in the region. "A fully-equipped beach must be designed to draw more Iranian tourists," he said, stressing that other beaches around Lake Van will receive Blue Flag status in the near future.

Tourism professionals said more touirst could come or want to extend their vacation if the city offers more activities. Lying on the Eastern Anatolian region, close to the Iran border and covering an area of almost 1,500 square miles, Lake Van is a crater lake formed after the volcanic explosion of Nemrut Mount. Due to its high salinity, the lake's water is not suitable for drinking and irrigation. The saline soda lake receives its water from a few smaller streams, which pour into the lake from the surrounding mountains. Some of the lake's main inflows are the Karasu, Hosap, Güzelsu and Zilan streams. The lake's western parts are deeper, while its Eastern waters are much shallower.

Known as "Thospitis Lacus," or "Arsissa Lacus" in ancient times, its modern Turkish name, "Van Gölü," is derived from Van, or "Chauon," the name of the capital of the Urartian kingdom that flourished on the lake's eastern shore thousands of years ago.

There are four small islands in the southern part of the lake, which are Akdamar, Çarpanak, Adir and Kuş. All of these islands are declared as archaeological sites.

The Akdamar Island is a popular one among visitors because of its well-preserved Armenian Church of the Holy Cross from the 10th century, which is also on UNESCO's World Heritage Tentative List. The island is connected to the land by small boats. In addition, a regular passenger boat operates between coastal towns along with a train-ferry connection from Tatvan to Van city, on the main railroad between Istanbul-Tehran.

During the first half of this year, Iran was one of the three countries that sent the highest number of tourists to Turkey. Last year, around 50,000 Iranian tourists visited the area and tourism professionals expect large numbers when the ongoing project comes to an end.
RELATED TOPICS