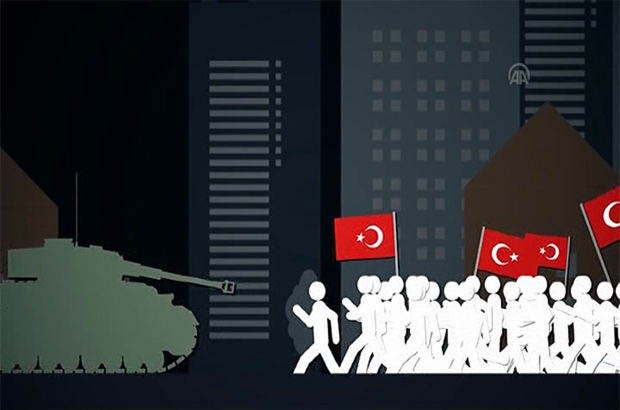 by Daily Sabah with AA Jul 28, 2016 12:00 am
A new short animation film depicting the July 15 failed coup attempt by the Gülenist Terror Organization (FETÖ) has gone viral on social media, drawing a great deal of interest as it shows Turkish people's solidarity and stance against the coup. Created by Hulusi Sağır, the animation has had thousands of shares in a very short period. "Thousands of people have shared and liked it. I feel happy after receiving good reviews from users," Sağır said, adding that his wife also helped him to create the animation.

In the animation, a tank fires on an individual holding a Turkish flag and after each round the number of people confronting it increases. Then the tank tries to escape and the group captures it. "I wanted to show that FETÖ cannot suppress the Turkish people," he further said, expressing his pride in his work. He said the animation must be shared all around the world to show what the Turkish people achieved that night. "Many people died that night to protect their country. This animation is a message from Turkey," he went on to say.

Following the failed coup, which martyred at least 246 people and left hundreds of others wounded, Turkey sent the U.S. an official request for Fethullah Gülen's extradition. He is accused of a long-running campaign to overthrow the state through the infiltration of Turkish institutions, particularly the military, police, and judiciary, forming what is commonly known as the parallel state.
RELATED TOPICS