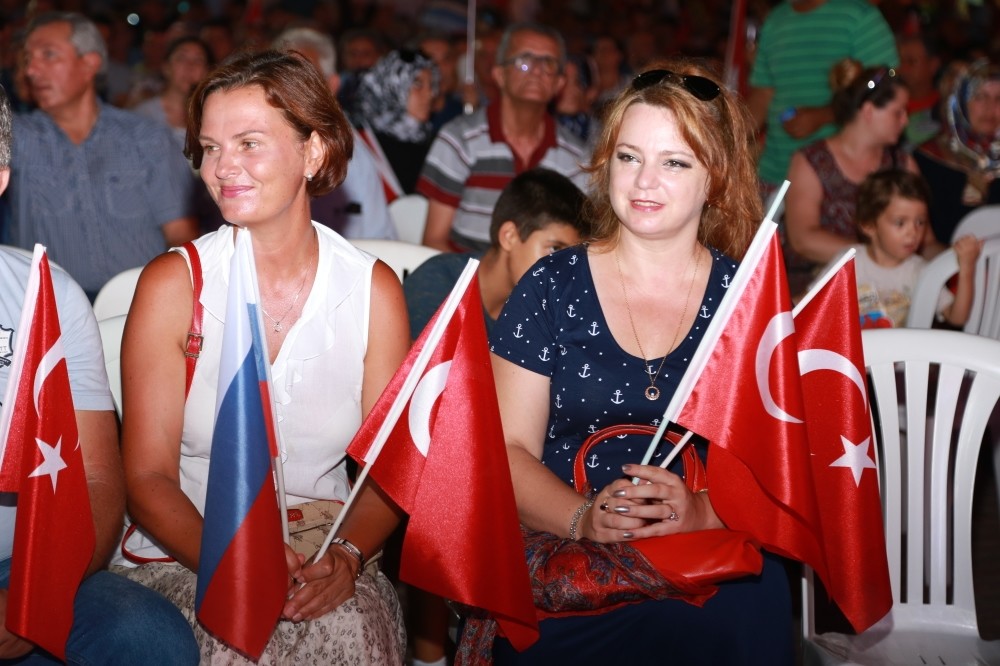 Russian residents at a u201cdemocracy watchu201d in Antalya.
by Daily Sabah with AA Aug 01, 2016 12:00 am
More people occupy public squares every night for "democracy watches," denouncing the July 15 failed coup attempt. Tourists and foreigners living in different Turkish cities also join the gatherings against the Gülenist Terror Organization (FETÖ), the prime suspect behind the coup attempt to seize power over the country.

In southern Antalya province, Russians take their place in the public squares, holding Turkish and Russian flags to show their support. Joining the people in the city's Cumhuriyet Square, Russians also followed the recent live broadcast of President Recep Tayyip Erdoğan on TVs through smart screens set up in the square. Some Russians even chanted protests with others in the square. Antalya Russian Culture and Arts Foundation President İrina Balcı said that they experienced a terrible night that night. "I learned what was going on while watching the TV. We gather in squares for democracy. July 15 witnessed unfortunate incidents," Balcı said. Anna Doğanyılmaz, a Russian resident in Antalya said, "We get our Turkish flags and come here to stand by democracy."

Since the July 15 failed coup attempt, celebrities, public figures and politicians have been rallying crowds at gatherings, showcasing the unity of the nation against the coup.
Last Update: Aug 01, 2016 1:01 am
RELATED TOPICS